A magazine aims at the obsessed

A magazine aims at the obsessed 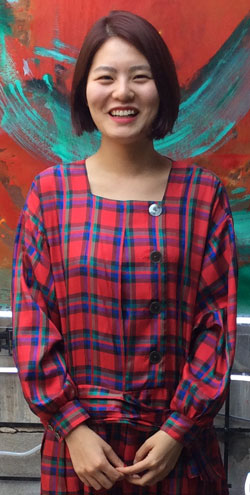 Won Jong-un, editor of the magazine Deokjideokji, smiles in front of a cafe in Jongno District, central Seoul. The first issue of her magazine is ready and will be available beginning this month. By Hong Sang-ji

As she watched the play unfold in a small theater in Hyehwa-dong, central Seoul, Won Jong-eun, 27, was taken aback by something she saw. Won had gotten to know several of the actors off stage. That night, seated close to the stage, she was struck by how much these acquaintances could turn into completely different people on stage.

“As soon as they began acting, the looks in their eyes changed. It was as if they were possessed,” she said.

Won is the editor of the magazine Deokjideokji, a title derived from the Korean word for maniac, “deokjil,” which arises from the Japanese slang term “otaku,” referring to an obsessive fan of a subculture or hobby. The magazine is dedicated to different types of obsessions, fetishes or infatuations, and the first issue of the magazine features photos of Won’s own obsession: theater actors.

After the play, Won feverishly searched for photos of the actors she had just seen perform. No matter how much she looked online, there was not a single good photo of the actors to be found. The photos she did discover were poor quality and unsatisfying, which gave Won the idea for the magazine. 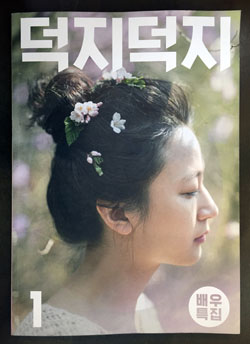 And her obsession with theater actors would fill the magazine’s first edition.

Work on the magazine started in March. Won, who studied traditional Korean painting and studio art in college, was new to the world of magazine publishing and photo shoots. But she was determined to try her best, and used all her connections to find staff and photographers for the magazine.

“Some fans of theater actors watch a play more than seven times; that’s their mania. I figured I could target those people,” said Won.

For its inaugural issue, the magazine did photo shoots with 12 actors, including Jun Suk-ho, a theater actor who also acted in television shows such as the popular TV drama “Misaeng” in 2014. Five professional photographers captured the actors in settings based on various themes, such as ‘first love’, ‘life on the streets’, ‘taking a bath’ and ‘in the office’.

Fulfilling her passion didn’t come easy. When a photo shoot required a flowering tree in the middle of winter, Won had to tape flowers to bare branches herself. On days when there was no photo shoot, Won worked a part-time job to make enough money to survive.

Thanks to updates on social networking sites and theater actor fans spreading the word about the publication, a total of 7.5 million won ($6,693) was raised through crowdfunding for the magazine’s production, well exceeding the initial goal of 5.5 million won.

Won also felt a sense of solidarity as she realized that there were quite a few people besides herself who had obsessions and wanted a magazine dedicated to them.

Five hundred copies of the magazine were printed. People who sponsored its production received a copy, and the remaining 300 copies will be sold beginning this month.

Won is planning on taking Deokjideokji to the next level by publishing it as a quarterly. For the next issue, she wants to concentrate on other fetishes like uniforms.

“There are a lot of people who fantasize about special uniforms, from police officer to firefighter to stewardess,” said Won. She’s full of ideas, from a special issue on religious boys - instead of the boy-next-door it will feature the boy-from-church or boy-from-temple - a middle-aged people issue and one dedicated to aspiring idols, or music stars.

“Give me an idea,” she challenged a reporter during an interview. A rock band drummer obsessed with his drums, a handsome boy focused on solving math problems, a charismatic college girl with a snaggletooth smile - fantasizing about such images is fun, and that’s what Deokjideokji is all about, said Won.