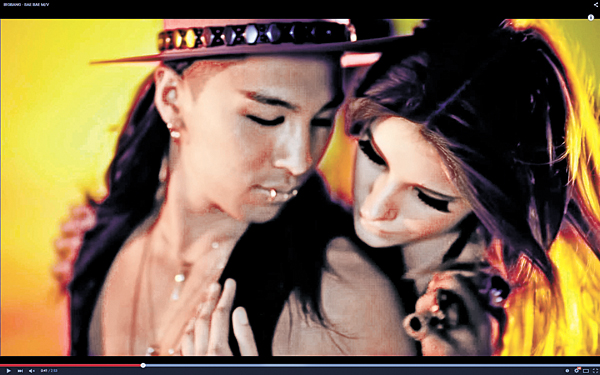 The appearance of Caucasian women in the K-pop scene has become noticeable in recent years. And no where is that trend more dominant than in the music videos of popular boy bands, especially those looking to appeal to a more global audience.

Yet, the increasingly frequent inclusion of Western women in such videos has begun to raise questions, some less comfortable than others, around the motivations for their employment, as well as accepted perceptions of race and sexuality.

Big Bang, one of the country’s top all-male K-pop acts, found themselves at the center of controversy after the release of the video for their song “Bae Bae,” which features the band interacting solely with white models and is rife with sexual innuendo.

The band’s more recent music video, for “Sober,” also includes the appearance of a white female in a sexually suggestive scene with one of the band’s singers. 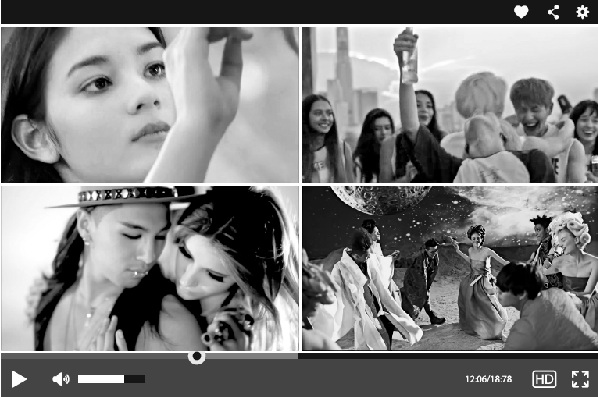 More K-pop videos in recent years have begun to feature white women. Top, screen captures of the music video for “View,” performed by Shinee; At the bottom are images from Big Bang’s music video for “Bae Bae,” which features white female models and a variety of sexual innuendo. [Screen capture from Youtube]

But while those instances may not raise eyebrows among Korean fans, they have caught the attention of some foreign viewers.

A few of the comments written below the music video for “Bae Bae” from YG’s official YouTube channel touched upon the phenomenon, including one that directly questioned the band’s choice: “I love Big Bang, but why are all the women in this video white?”

White women also feature in popular boy band Shinee’s music video for “View,” in which the bandmates are shown drinking and partying with them.

When pressed, however, most entertainment companies were unwilling to expand on their reasons for including Western women rather than females of other races, saying that it was up to the viewer to decide.

“We do not provide detailed reasons behind Big Bang’s decision to include white females in their music videos because we want to leave the viewers free to interpret the clip,” said a source affiliated with YG Entertainment, the band’s talent agency.

Lending another voice was pop critic Ha Jae-geun, who said that the issue stemmed from the fact that Korean pop culture had developed and been heavily influenced by Hollywood and American trends in music and fashion.

“Under the American influence, Koreans have been making videos that are highly similar to those of Hollywood’s, and as a result, it has become natural for Koreans to portray white people in clips that are made in a more Western style.”

“Koreans don’t really raise or see racial issues in K-pop videos [because they are so used to seeing Hollywood-style videos of the same nature], so [it’s understandable that] these music videos may seem inappropriate to foreign people, who are relatively sensitive to race,” he added.

Ha also noted the global appeal of K-pop and the industry’s efforts to make inroads into foreign markets.

“Korean music videos are seen not only by Korean people, but also by people around the world [thanks to the rising popularity of K-pop bands].

“Creating clips that can be enjoyed by people around the world is more sensible, especially in terms of race and the inclusion of other races,” he said.

Still, the story takes a different turn when considering content by female K-pop groups, where white men - let alone men from other races - have rarely appeared in music videos.

In the majority of clips, the female members of the band, and sometimes Korean men, are the main features.

In the music videos for the girl bands under YG Entertainment, for example, hardly any Caucasian males appear, which is in stark contrast to those put out by the agency’s all-male acts.

That trend is evidenced, in particular, in the majority of the music videos by 2NE1, represented by YG, which mostly revolve around the band’s four members and sometimes feature one or two Korean men.

Although the group has released a number of music videos since their debut in 2007 and has global appeal, hardly any white males are to be found in their repertoire.

Perhaps one of the primary reasons behind the issue is that girl bands already have a set target audience, mostly Korean obba troop (a term describing Korean males in their 20s and 30s who follow girl groups), according to art critic Lee Taek-kwang, who also teaches at Kyung Hee University.

“Since their purpose as singers is to appeal to their main target [obba troop], who are attracted to this delicate but sexy female image [pervasive in Korean pop culture], most girl groups attempt to pursue such an image [through their music videos].”

“Korean men don’t like seeing Korean girls hanging around with Caucasian men [because they perceive white men to be more attractive],” he said.

According to Lee, in that sense, it is only natural for girl groups to promote themselves as the main focus of their videos, particularly because, for their target audience, that in itself is usually enough.