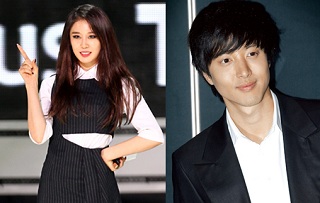 Actor Lee Dong-gun, 34, and singer-actress Ji-yeon of girl group T-ara, 22, admitted that they are dating on Saturday, after the two were engulfed in a love scandal earlier on the same day.

According to MBK Entertainment, or the female celebrity’s talent agency, “Lee and Ji-yeon recently completed their month-long shoot for their Korean-Chinese co-produced movie “Reunion” (working title), on a cruise.”

“While frequently having conversations about their work, they naturally became closer, and the two became a couple at last. We hope many people view their romantic relationship positively.”

After their affair was announced, previous comments that Lee made regarding his ideal type have become viral on the Internet.

During a March press conference for tvN’s drama series “Super Daddy Yeol,” the actor said, “My ideal type is someone bright and energetic.

“I’m usually calm, so I want to date someone who is brighter and more energetic than me,” he continued. “If both of us are too calm, I don’t think it would be good.”

Lee and Ji-yeon’s love scandal went viral after two pictures of the couple having a friendly meal together were released on various Chinese SNS services such as Weibo. In the pictures, the two are holding hands.