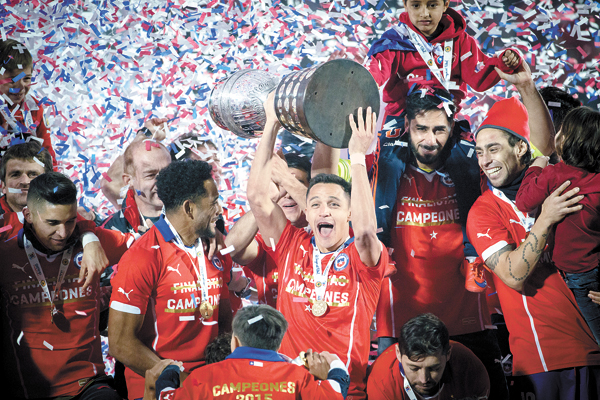 Chile players celebrate after winning the 2015 Copa America against Argentina at the National Stadium in Santiago on Saturday. Chile won the penalty shootout 4-1 after a 0-0 draw. [XINHUA/NEWSIS]

SANTIAGO, Chile - The wait is finally over for Chile. Argentina’s title drought continues.

Goalkeeper Claudio Bravo made a save and striker Alexis Sanchez converted the winning penalty as the hosts defeated Argentina 4-1 in a shootout after a 0-0 draw in the Copa America final on Saturday, finally winning its first major tournament.

The result extended Argentina’s 22-year title drought, and Lionel Messi will continue to hear criticism for his lackluster play with the national team when it needs him the most.

Bravo stopped Ever Banega’s low shot by diving to his left to make the save and, earlier, Gonzalo Higuain also missed for Argentina, sending his shot over the crossbar.

The Chileans made all of their penalties, and captain Bravo lifted the nation’s first ever trophy in front of President Michelle Bachelet and nearly 50,000 Chileans who packed the Estadio Nacional, frantically waving Chile’s red, blue and white flags.

The title rewarded the nation’s best generation of players after years of disappointments in the South American tournament and at World Cups. The victory secures Chile a spot in the Confederations Cup for the first time.

“This is a dream, this team deserved a victory like this,’’ said midfielder Arturo Vidal, one of the leaders of this golden generation. “The Chilean people needed this triumph, needed something so beautiful as being crowned America’s champion.”

Chile hadn’t made it to a final in 28 years, when it lost to Uruguay in the Copa America in Argentina. It finished runner-up four times, including at home in 1955. Its best result at a World Cup was a third-place finish at home in 1962, and last year it reached the round of 16, being eliminated by host Brazil on penalties.

“We had to leave this negative history behind us,’’ said Barcelona goalkeeper Bravo, Chile’s most experienced player all-time with nearly 100 caps. “This is a privileged generation. We had to take advantage of it.’’

Argentina’s disappointment comes less than a year since the 1-0 loss to Germany in the World Cup final. Argentina lost consecutive Copa America finals to Brazil in 2004 and 2007, and in the 2011 tournament at home, Messi and his teammates didn’t make it past the quarterfinals.

“We will just keep trying,’’ said Argentina coach Gerardo Martino, who four years ago lost the Copa America final while managing the Paraguayan national team. “We will keep trying with these same players that today are crying in the locker room.’’

Saturday’s defeat came exactly 22 years after Argentina won its last title at the 1993 Copa America, when Messi was only a kid. Since then, it has failed in seven Copa Americas and six World Cups, with Messi playing in five of those tournaments.

“We did everything we could but again it wasn’t meant to be,’’ said Javier Mascherano, Messi’s teammate at Barcelona. “It’s incredibly painful, and we know it’s only going to get harder from now on.’’

Messi struggled throughout the match on Saturday and was never a factor, looking nothing like the star that he usually is with Barcelona.

It was an even final from the start, with the teams creating few scoring chances. Chile controlled possession during most of the second half and came closer than Argentina to getting on the board.

Sanchez had one of the game’s best opportunities in the 82nd, but his close-range shot missed wide.

Argentina’s greatest chance came in the last play of regulation in a breakaway that started with Messi near midfield, but Higuain hit the outside of the net after a dangerous cross into the area.

In extra time, it was Sanchez who almost scored in a counterattack after Javier Mascherano misplayed a ball near midfield, but his right-footed shot missed the target.

In the shootout, Matias Fernandez, Vidal and Charles Aranguiz all netted for Chile, while Messi scored Argentina’s lone goal in the team’s first attempt. AP