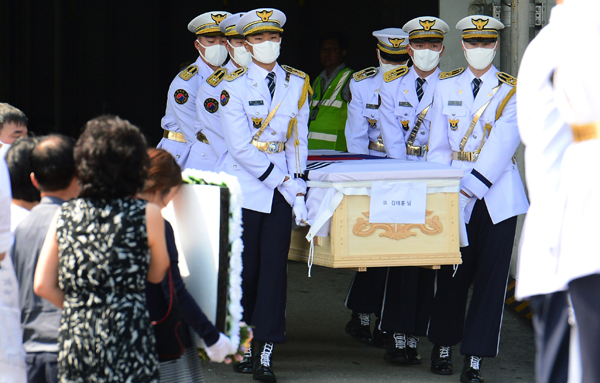 The bodies of the 10 Koreans who were killed in a bus accident during a government officials’ training program in China’s southeastern Jilin province last week, arrived back home Monday.

Funerals for the nine government officials who died in the bus crash will be held in their respective provinces and cities across the nation. The tenth victim was a Korean tour guide and his funeral will be held privately.

The remains of Choi Doo-yeong, the 55-year-old president of the state-run Local Government Officials’ Development Institute that was in charge of organizing the leadership program, remained in China after they were found outside a hotel in Jian Sunday. Chinese authorities confirmed Monday Choi committed suicide.

He had flown to the city of Jian in Jilin Province Thursday after the fatal bus crash to deal with the survivors and the bodies of the victims.

Last Wednesday, a bus carrying over two dozen Korean civil servants skidded off a bridge and flipped over into the river below, which resulted in 11 deaths including the Chinese bus driver.

They were being transported from Jian toward Dandong in Liaoning province, near the border with North Korea, when their bus unexpectedly veered off the bridge. Chinese authorities determined the driver was speeding along the curvy road and had been negligent.

They were part of a group of 148 government officials from across Korea participating in a leadership training program in China organized by the institute.

Many of the government officials who were killed, from major cities including Busan, Incheon, Gwangju and Seoul, and provinces including Gangwon, North Gyeongsang Gyeonggi and Jeju, were in their 50s.

The bodies of the nine officials and the Korean tour guide arrived in a plane at Incheon International Airport on Monday afternoon accompanied by 37 family members, 10 government officials and an interpreter.

The officials’ coffins, shrouded in Korean flags, were transported to their home towns, where their municipal or provincial governments will be holding their funerals. The exception is an official from North Gyeongsang. His relatives want to hold a family funeral.

A group of over 100 government officials who were also on the trip were also due back in Korea Monday.

The 16 Koreans injured in the bus accident are being treated at a state university hospital in Changchun, the capital of Jilin. Those who are in good enough condition to fly are expected to return to Korea soon.

Officials expressed deep regret for the death of Choi, and his family arrived in Shenyang late Sunday after jumping out the hotel window.