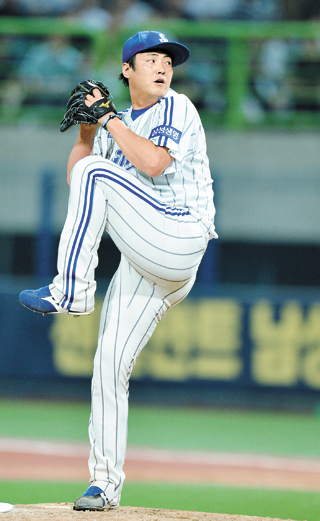 Since joining the Samsung Lions in 2002, An Ji-man has played one role: relief pitcher.

The 31-year-old right hander has learned from former Lions pitchers like Oh Seung-hwan and Jong Hyun-wook, as well as current Lions veteran Kwon Oh-joon, and those lessons are paying off - An is setting Korea Baseball Organization league records.

On June 2, An became the first pitcher to amass 150 holds in the league, after shutting down the Lotte Giants for 1 2/3 innings with five strikeouts, allowing one run. The Daegu-born player is also the first pitcher to have more than 20 holds for four straight seasons and the fastest to collect 20 holds, in just 34 games.

The two-time Asian Games gold medalist is also the most expensive relief pitcher in the KBO, signing a four-year deal worth 6.5 billion won ($5.7 million) with the Lions last year after becoming a free agent. His deal is the fourth-largest among KBO pitchers.

In an interview with Ilgan Sports, an affiliate of the Korea JoongAng Daily, last month, An said he aims to further his hold record this year. As of Wednesday, he has totaled 20 holds in 40 innings pitched. He is going 2-1 with a 2.70 ERA.

Q. You became the first pitcher in the league to get 150 holds. How do you feel?

A. Honestly, I did think about the record. It would have been better if I’d done it clean, but I was mad at myself because I gave up a run. After giving the run up, I pitched all-out. It meant a lot to me that I’m the first one to achieve the record.

Did you ever think you’d earn such a big record as a relief pitcher?

No. At first, I just wanted to be on the first team roster. I have grown up because I played with top veteran players. I think our past bullpen lineup of Jong Hyun-wook, Kwon Oh-joon and Kwon Hyuk is a combination that will never happen again. All these players can play as closers on other teams. With the Lions, we dominated the league. I learned how to pitch in certain situations and manage my body, as well as different training methods, by playing with them.

How much do you pay attention to the new records you’re setting?

It’s only when I read articles online that I realize I’m just a step away from achieving these kinds of records. Honestly, my records have only been possible because I’m with the Lions. If I played for other clubs, I might not have only played as relief pitcher, but also as starter and closer.

Did you dream about playing as a starting pitcher when you joined the Lions?

Well, I feel a little bit of regret. I dream about becoming Korea’s first pitcher to throw a perfect game, but since I’m a relief pitcher, I can’t do that. But I really want to achieve that record. My personal best so far is getting a no-hitter for six innings.

You seem to get over bad games easily, even when you haven’t performed well on the mound.

I have nothing to say when the manager sent me to solve dangerous situations, but ended up giving runs to opponents. When those things happen, I blame myself. “I should have done this, but why couldn’t I?” I think a lot about it, but I try to forget about what happened just a day later.

I also tell young pitchers to forget today’s game after today. But I also tell them to learn from their mistakes when they face a similar situation in the future.

I think pitchers tend to think bad things instead of good things. For example, you think about a bad head-to-head record against a certain hitter. In contrast, I get good results when I think about how many outs and strikes I collected from an opponent batter.

What’s been the best and worst moment of your professional career?

In the 2004 and 2005 Korean Series, I didn’t perform impressively. In 2006, I watched the team win the series from a billiards club. Back then, I’d hurt my back and was omitted from the roster. I drank a lot that day.

My happiest moment would be when we won the Korean Series in 2011 and 2012. I was one of the core players and pitched lots of innings. I also remember getting a lot of attention when I played as a relief pitcher in the Asian Games last year, during which we won the gold medal.

You signed a four-year deal worth 6.5 billion won, the biggest in KBO history for a relief pitcher.

I won’t relax just because I’m guaranteed a lot of money for four years. Because I signed the deal, I should be able to collect at least 100 more holds. If I do well, maybe I can sign another deal. I want to play at least 10 more years. I don’t think there’s any job as good as being a baseball player.

Relief pitchers are seen as more valuable than in the past. Do you think you’ve helped make this true?

What’s your goal for now?