FDI at second-highest level for Q1 in five years

FDI at second-highest level for Q1 in five years 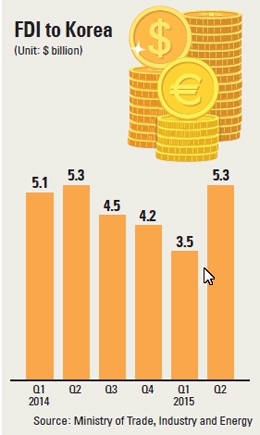 Korea’s foreign direct investment (FDI) during the first half of this year reached its second highest within the past five years, thanks to foreign mergers with local businesses and joint investment projects during the second quarter.

According to data released by the Ministry of Trade, Industry and Energy on Wednesday, new foreign investment declined by 14 percent year-on-year to $8.9 billion; however, the ministry said it was a well-defended amount compared with in previous years.

Incoming FDI reached $10.3 billion in the first half of last year, the highest on record, showing sharp growth from $8 billion during the same period in 2013.

Last year’s growth came after investment from China and Europe nearly doubled, likely thanks to the Korean government’s deregulation efforts early that eased tax rules on foreign companies that open headquarters and research centers in Korea.

This year, first-quarter FDI to Korea stood at $3.5 billion, lower than usual quarterly performance, due to a sagging global economy and a slowdown in China’s external economic policies.

Still, second-quarter FDI jumped above the $5 billion mark, to $5.3 billion, thanks to FDI from the Middle East, primarily from the 1.24 trillion won ($1.1 billion) investment project between Posco E&C and the Public Investment Fund of Saudi Arabia.

The deal was agreed to during President Park Geun-hye’s visit to the country in March and boosted overall first-half FDI from the Middle East by 4,095 percent year-on-year.

Besides investment from the Middle East, the Trade Ministry said mergers and acquisitions from Europe and China worth about $1.3 billion contributed to lifting overall FDI performance.

The Trade Ministry concluded that the first half was difficult for foreign investment, due to the outbreak of Middle East respiratory syndrome in the second quarter that resulted in cancellations of investor events and the recent Greek debt crisis.