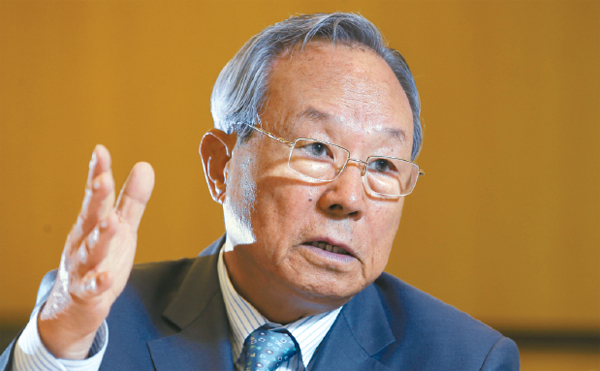 
The escalated conflict between the ruling Saenuri Party and President Park Geun-hye over the past few weeks has complicated public sentiment toward the country’s current political leaders.

The immediate future of politics appears grim, particularly with President Park’s veto on a revision to the National Assembly Act that would have strengthened lawmakers’ authority to demand changes in administrative legislation like presidential decrees and prime ministerial ordinances.

The bill infuriated the president, leading her to call for Rep. Yoo Seong-min, the Saenuri floor leader, to step down.

So to clear up any uncertainty and provide some insight into the goings-on in the political sphere, the JoongAng Ilbo, an affiliate of the Korea JoongAng Daily, sat down last week with veteran lawmaker Park Kwan-yong, the former speaker of the National Assembly, to hear his views on the state of government affairs.

From 1993 to 1994, Park served as President Kim Young-sam’s chief of staff, though he spent most of his 36-year political career in the National Assembly, where he served as speaker from 2002 to 2004. He is also one of just a handful of politicians with years of experience working in both the legislative and executive branches.

Q. What do you think is the main cause of conflict between the ruling party and the current administration?

A. I think the conflict arises from a lack of communication and dialogue between the ruling party and the administration; I don’t think it’s a legal one, and I don’t think this situation would have come about had President Park and Rep. Yoo discussed this piece of legislation.

The president referred to the situation as a “politics of betrayal,” but I don’t believe that a legislative revision is akin to betrayal. I can’t help but wonder if the situation has become complicated by other conflicting emotions present in the relationship between President Park and Rep. Yoo.

Do you agree with the claims that the legislative revision is unconstitutional?

Even legal scholars are evenly split over this question. From the perspective of a politician who has managed the National Assembly, there have been a number of times the administration, in the process of actualizing legislation through its decrees and ordinances, has thwarted the initial intent of the law.

In our National Assembly, expert assemblymen discuss and examine decrees and ordinances every few months and report back to the rest of the Assembly. They also use the words “request” and “demand” with extreme discretion. For me, this does seem to raise the question of whether this [legislative revision] can be considered unconstitutional.

Wasn’t the issue that the legislative revision was hurriedly inserted without due process?

Decrees and ordinances can already be regulated under National Assembly Article 98. The law states that if it seems like a parent law has been violated, the administration can be notified. It’s definitely understandable that the National Assembly would claim that there is no significant difference between the present law and what the revision would accomplish.

Yet the president has vetoed the legislative revision on the basis that it is unconstitutional.

Yoo should have told the administration that he was pushed to consent [to the legislative revision] in the process of negotiating with the main opposition party. The situation worsened because the senior secretary to the president for political affairs and the special adviser to the president of political affairs didn’t do what they were supposed to do. An incumbent was chosen to be the special adviser, but there was no point. There’s been no discussion about how these people did not do their jobs.

Why are there so many instances of decrees and ordinances diverting from the intent and scope of the law in this country?

It’s because our political parties lack the ability to develop policy. Our parties are leader biased. Parties formed around a leader are only required to follow that boss and have no need for ingenuity or policy development. Since our parties lack the ability to develop policy, significant parts of the law have come under decrees and ordinances. Though I did not allow this as National Assembly speaker, executive branch civil servants used to be expert committee members for the National Assembly. Everything was done according to the administration, and even working-level legislation was managed by the executive branch, so decrees and ordinances were, of course, a mess. However, now [the legislative branch] can keep [the executive branch] in check. I think it’s a positive development.

Why aren’t the ruling party and the administration communicating?

The president’s personal disposition is the main reason.

Is it an issue of President Park’s ruling style?

I think that it’s a case of a daughter having learned from her father’s example, which was a successful commanding ruling style that transformed Korea from an agrarian society, and I wonder if she can escape that.

The issue of communication was brought up at the beginning of the Park administration, yet there has been no progress on regarding it. What do you think?

I know better than anyone else President Park’s righteous beliefs. But there must be an effort made into putting those thoughts into practice, and these efforts center around persuasion, communication and compromise. My personal beliefs are important, but other people’s thoughts can, at times, be wiser than my own. That’s a basic principle in democratic politics. However, President Park flatly refuses to meet people wanting to offer advice or with opposing beliefs.

Does she not meet with party leaders or senior party members?

I don’t know if she’s not meeting with them or if she can’t meet them. Why can’t the president meet with lawmakers and persuade them to do something? It’s a pity. The era of singular rule has passed.

Historically, other presidents have also distanced themselves from the National Assembly. Why is that?

Just because we’ve adopted democratic procedures doesn’t mean that we’ve developed into a democratic society. We must consider these conflicts between the executive branch and the National Assembly as instructive and take something away from them to further democracy. We will not develop if people insist on approaching these conflicts in a binary manner and insisting on winners and losers.

Do you think the situation around Rep. Yoo’s possible resignation can be resolved?

I don’t think so. The administration and the ruling party must take responsibility for their communication issue and take a step back and make good plans. Nothing good will come out of trying to blame someone else.

Some say Yoo must resign for the president to keep her authority.

With the presidential veto, the legislative revision that sparked this situation has returned to the National Assembly, and the conflict has been resolved because the ruling party did not participate in the vote. For Yoo to step down is one solution. However, rather than resigning simply because the president demands it, the two should meet, discuss the situation and resolve to never have this happen again.

If not, and Yoo is unilaterally driven to resign, the situation will not be resolved. If this was a fight between gangsters, the story would end when one person was struck down and had to beg for his life, but this is politics.

So what is the solution?

The situation has become more complicated, so the president and the National Assembly speaker must meet. And the president must meet with ruling party representatives to discuss a solution.

This is a very commonsensical answer, but why this is not already happening is bewildering.