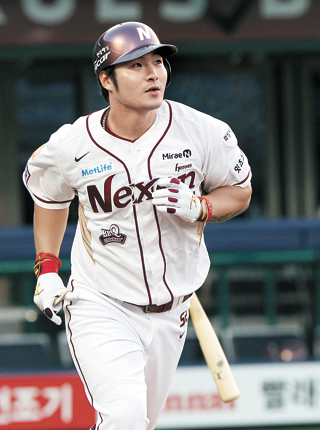 The Korea Baseball Organization announced Wednesday the names of 24 All-Stars picked by the managers, but surprisingly, the Nexen Heroes slugger and three-time Golden Glove winner Park Byung-ho wasn’t on the list.

Since Heroes manager Yeom Kyung-yup was also the manager of the Nanum All-Star team, it was widely expected that Park, last year’s All-Star Game MVP, would be included. The Heroes first baseman, Yeom said, voluntarily withdrew.

“About 10 days ago, Park met with me privately and requested for personal reasons that he not be named,” Yeom told reporters Wednesday before a game against the Kia Tigers. “Since Kim Tae-kyun [of the Hanwha Eagles] was third in fan votes [among first basemen],” he said it would be good for me to select Kim. I wanted to respect his opinion.”

Park, who turns 29 on Friday, will miss his third All-Star Game, but that doesn’t mean he isn’t the KBO League’s star player. As of Wednesday, the two-time MVP is leading in home runs (25), hits (105) and runs scored (74), and has the second-highest batting average, .340, in the league.

Park is in a tight race with the NC Dinos’ Eric Thames and the Lotte Giants’ Kang Min-ho for the home run crown; both have 24, and the Samsung Lions’ Yamaico Navarro has 23.

Park came to the Heroes from the Giants in a 2011 trade. Last year, he hit his 30th home run on July 11 and finished the season at 52, becoming the third player in KBO history to reach 50 in a single season. Lee Seung-yuop and Shim Jong-soo are the others.

His home run pace has slowed compared to last year, but he is looking for his fourth straight home run title, a feat no one has yet accomplished in the league. The legendary KBO hitters Lee Man-soo, Jang Jong-hun and Lee Seung-yuop were stopped at three in their quest for consecutive titles.

Park, who was captain of the gold medal-winning Korea national team at the Incheon Asian Games last year, also has a shot at the triple crown. He now sits .023 percentage points behind the batting average leader, teammate Yoo Han-joon, who is hitting .363. Park led the league in RBIs for the last three years and was tied for fourth on Wednesday at 68, seven behind Thames.

If he manages to overtake Yoo and Thames, he would be the third player in KBO history to claim a triple crown. Former SK Wyverns manager Lee Man-soo was the first to claim that crown, in 1984, and the former Lotte Giants slugger Lee Dae-ho, who is now with the Fukuoka SoftBank Hawks vin Japan, did it twice, in 2006 and 2010.

Last year, Park tried to focus on getting on base, as Kang Jung-ho, who is now with the Pittsburgh Pirates in the U.S. majors, followed him in the batting order. But after Kang left for the U.S., Park’s batting style changed a bit. After this season, the North Jeolla native will be eligible to sign a contract abroad.

At the Heroes’ spring training camp in Arizona earlier this year, scouts from the Texas Rangers and Chicago Cubs reportedly came to see Park. Last week in Seoul, scouts from the Boston Red Sox and San Francisco Giants were in the stands.

Some reportedly were checking not only Park’s baseball talents, but also his relationships with teammates, his family affairs and how he controls stress.

Observers here say Kang’s performance in the majors may be a critical element in attracting attention and a contract from an American club; Kang is the first batter to go directly to the U.S. big leagues from the KBO. On Thursday, Kang went 2-for-4 with an RBI against the San Diego Padres. The Pirates’ shortstop is sitting on a .263 batting average and has four home runs this season.

“Last year, MLB scouts were in Korea in the second half of the season to see Kang Jung-ho, but this year they are here early in the season [to see Park]” said Kim Chi-hyun, an official of the Heroes.