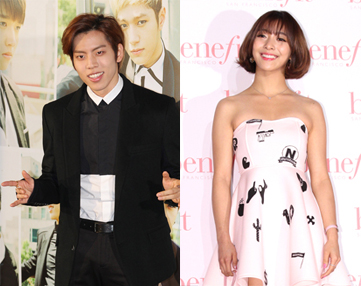 Luna of the girl group f(x) and Jang Dong-woo from the boy band Infinite are slated to participate in the musical “In the Heights,” according to Korean media outlet MBN on Thursday.

Several people from the music industry confirmed that the two singers are currently preparing for the musical.

The story is based in Washington Heights in Manhattan, New York, and the story revolves around immigrants who face ups and downs in trying to achieve their dreams.

The female singer has been highly acclaimed for her musical talent through various projects such as MBC’s reality program “King of the Masked Singer” and the musicals “Legally Blonde” and “High School Musical.”

For the male singer, it is his first time to participate in a musical. However, since he is the rapper of his boy band, he is expected to fit well with the musical that incorporates the hip-hop genre.

The project has been critically acclaimed for including rap and hip-hop music, which are unprecedented in other musicals of the same genre, as well as unique choreography.

Since “In the Heights” premiered on Broadway in 2008, it has received various awards from several host institutions, including the Tony Awards in 2008 and Grammy Awards the following year.

The musical is slated to be performed from Sept. 4 to Nov. 22 at Blue Square Samsung Card Hall in Yongsan District, central Seoul.