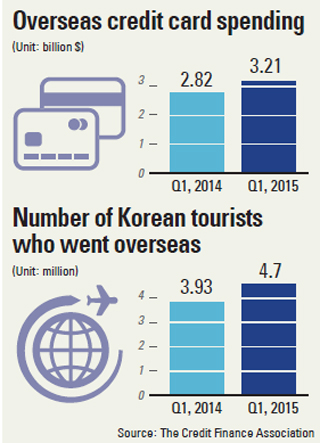 Credit card spending overseas by Koreans hit a record amount in the first quarter of this year, continuing double-digit growth for an eighth consecutive quarter, a report showed Thursday.

Koreans spent $3.2 billion overseas in the first three months of this year, a quarterly high and up 13.8 percent from a year before, according to the Credit Finance Association on Thursday.

Overseas spending, which has seen double-digit growth since the first quarter of 2013, rose sharply on the back of an increase in duty-free limits and in the number of local tourists travelling abroad.

The duty-free limit has been lifted to $600 per person from $400 since last September, while the number of tourists going overseas jumped 19.4 percent to 4.7 million in the first quarter from 3.93 million a year before.

According to Incheon International Airport, the number of items that have been imported under the tax-free category was 4.7 million through May of this year, up 55 percent from three million in the same period a year ago.

In terms of categories, spending at hospitality establishments including hotels, motels and resorts, at $251 million, was up 9.8 percent year-on-year. Spending on tour agencies and train tickets was up 51 percent compared with a year before to $184 million.

In terms of regions, Koreans’ credit card spending in Luxemburg rose 81.6 percent to 82 million as the European headquarters of major global online retailers including Amazon and eBay are located in the country.

The United States accounted for the bulk of credit card charges by local consumers, accounting for $911 million out of $2.6 billion.