A former fighter pilot recalls his wartime past

A former fighter pilot recalls his wartime past 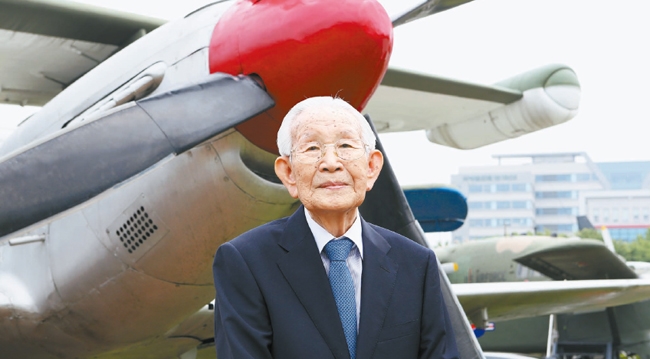 General Kwon Seong-keun visits the War Memorial of Korea. Behind him is an F-51D Mustang combat jet, the model he once flew. By Choi Jeong-dong

Gazing at the F-51D Mustang combat plane, the veteran’s eyes were still sharp. And just like the fighter jet he flew during the 1950-53 Korean War, his face had wrinkles carved in from years gone by.

But retired General Kwon Seong-keun looked elated as he stood before the old combat plane on July 1, at the War Memorial of Korea in Yongsan, central Seoul, as if he had just met his former self.

He closed his eyes as he recalled the many times he risked his life during the conflict.

“There, you transcend the fear of death. It felt like being on a spaceship spiraling past meteors in muted silence,” said the 90-year-old Kwon, credited with contributing to the establishment of the nation’s Air Force.

The general was dispatched dozens of times during the war, though it has been decades since he has taken to the skies.

The JoongAng Ilbo recently sat down for an interview with the former Korean Air Force pilot to hear more about his life during the Korean War and under Japanese colonial rule.

Q. Why did you become a fighter pilot?

A. The Japanese conscripted soldiers extensively toward the end of the Pacific War once their situation became unfavorable. So although I was the second son in my family, I couldn’t escape the draft. I’m flat-footed, so I didn’t want to join the Army, where you’re required to march while wearing military gear. So I had to apply for either the Navy or the Air Force. At the time, the Navy didn’t recruit Koreans. Even though I’d never even seen an airplane, I applied to the Flight School for Men when I was 17.

What was it like when the Korean War broke out?

The day the North Koreans invaded the South, I was a second lieutenant in the Flight 1 Squadron, working as a duty officer for the week at Yeouido airfield. As I performed the officers’ kit inspection and looked around the barracks, I suddenly heard noises that sounded like peas being fried. Instinctively, I ran outside, feeling that something ominous was about to happen. Then a Soviet IL-10 fighter jet, used by the North Koreans, came into view. I prepared for a counterattack with the other men, but the only weapons we had were rifles and light machine guns. There was no way that we could shoot down the enemy’s planes with those. The North Korean jets attacked two or three more times.

How did the South Korean Air Force counterattack the North Korean military?

On June 26, we brought 15 kilograms (33 pounds) worth of explosives from the U.S. ammunition chamber. I sat in the front seat of the plane, and in the back seat, another pilot got on the plane with his arms full of bombs and grenades. We headed to Dongdu Stream, where North Korean military tanks were moving along the road.

We threw the explosives down at the tanks with our bare hands. The bombs exploded, and there were momentary swirls of dust, but the tanks started moving again as if nothing had happened. We set out again on the second day. This time, we threw the bombs on the road. That was to destroy the road to prevent as many tanks from moving south as possible.

Were there any instances when you felt afraid to fight?

The time when fighter pilots feel the most fear is the night before making a sortie. But when we wake the next day, those thoughts disappear and we go into a state of passivity. I would often assign each of my footsteps as even or odd, and I used to think that if I finished my walk to the combat plane on an even step, I’d survive that day.

What are your sentiments toward the Korean War?

It was an ethnic tragedy that involved tremendous sacrifice. It can also be seen as a proxy war resulting from conflict between the United States and the Soviet Union. I was a soldier and thus acted like a fighter, following orders with the sole thought of protecting my country.

What are your thoughts on war?

I have the conviction that there should never again be another war on the Korean Peninsula. Even if conflicts occur, it’s best to resolve them by peaceful means. There are cases when we often look back on our past and find ourselves not being able to accept the things we once did. To direct history in the right path, efforts are needed to minimize those acts of trial-and-error.