3 keys to profits for funds this year

3 keys to profits for funds this year 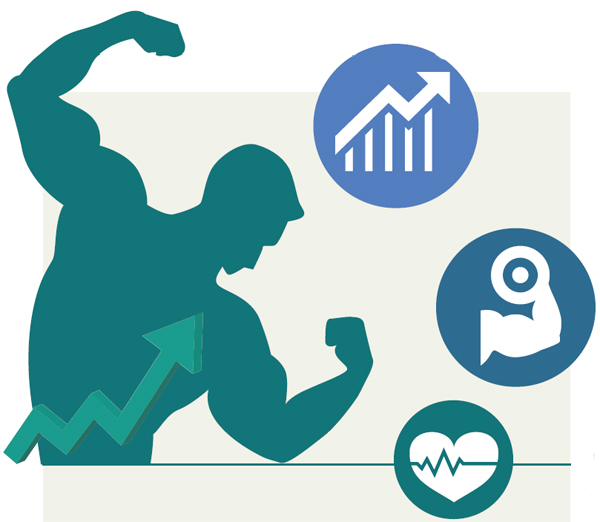 “Health,” “small” and “China” were the keywords in the funds market in the first half of the year.

Seven of the 10 most profitable funds were small and midsize-caps.

Most overseas funds invested in China, with those who did being the top 10 funds in terms of profits.

Considering that the interest rate for a fixed deposit with a one-year maturity was between 1.3 and 1.7 percent, fund returns are much higher. 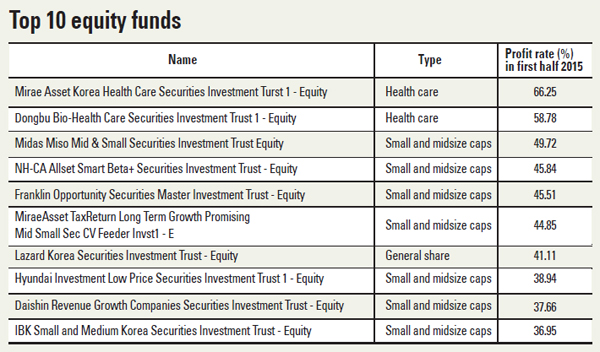 The boom in health care stocks that started in the U.S. has also affected the Korean financial investment markets.

Health care shares are leading stock markets as IT shares did on the Nasdaq in 2000. Pharmaceuticals and biotech stocks became the largest industry by market capitalization, marking $1.45 trillion, which is 18.5 percent of the Nasdaq’s total market cap of $7.8 trillion, followed by software (18.4 percent) and IT hardware (17 percent).

“Local health care shares’ market cap rose to 5.7 percent last month from 0.9 percent in January 2000,” said Hong Seung-ik, analyst at KDB Daewoo Securities. “The industry’s market cap is likely to continue to grow because they are leading the Nasdaq in the U.S. and Korea’s key industries such as IT, cars and steel are losing competitive edges [on global markets] amid a global currency war,”

Also, eight of the 10 leading domestic fund operators possess less than 1 trillion won in assets. The assets of Hyundai Investment, which topped the list with a 37.37 percent return, is only 310.2 billion won ($279.4 million).

Overseas investment funds’ favorite destination was China, with the top 10 overseas investment funds invested in Chinese stock markets. The return of Samsung China Main land Mid&Small Focus Securities Feeder Investment UH-EQ hit 61.77 percent in the first half thanks to the performance of the Shanghai Stock Exchange A Share Index, which soared 32.17 percent, and Shanghai Stock Exchange B Share Index, which jumped 48.52 percent.

“Overseas funds investing in China grew to 37 percent this year from 34 percent in 2008,” Kim Hoo-jung, an analyst at Youanta Securities said. “When considering that China investment is a large part of Brics funds, the real ratio will go up above 50 percent.”

Kim said a so-called “home bias” explained why so much overseas investment went to China.

“Investors tend to choose neighboring countries or regions familiar to them when they decide where to put their money,” he said.

But the Chinese stock markets have been highly unstable recently. The Shanghai Composite Index marked a record high of 5,166.35 on June 12, but plummeted by 29 percent to 3,686.92 after three days. 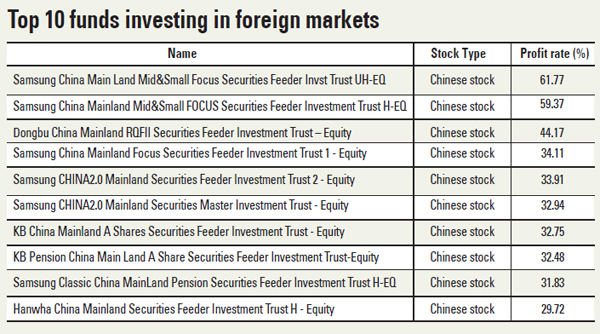 “The reason for the plunge is not about the economy in China, but just because it entered a correction mode due to a short-term imbalance in supply and demand. It is not likely to plummet like in 2008,” Hong Ui-seok, head of the Hong Kong branch of Samsung Asset Management, said. “After short-term volatility, the market will gradually rebound in the third quarter.”

The steep rise of equity fund returns has brought significant changes in capital flows. Capital had outflowed for the fifth consecutive month from January, but in June, the net inflow was 1.468 trillion won. Before, investors sold shares to profit when returns rose and that stopped the index from jumping higher.

“Before, capital outflowed when the index rose and flowed in when it retreated,” Jeon Chul-kyu, KG Zeroin marketing director said. “There are high expectations for additional rises in small and mid-cap stocks as huge capital - 791.8 billion won in the first half - flows into small and mid-cap funds despite their high returns.” 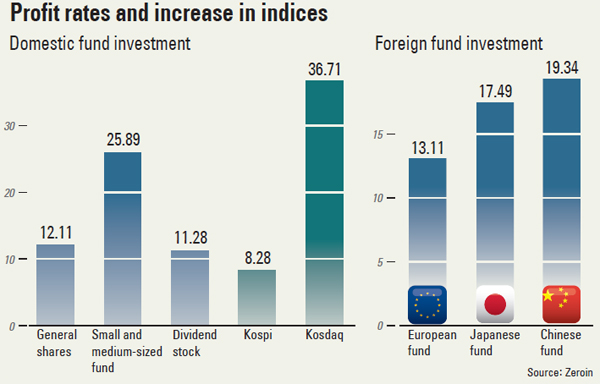