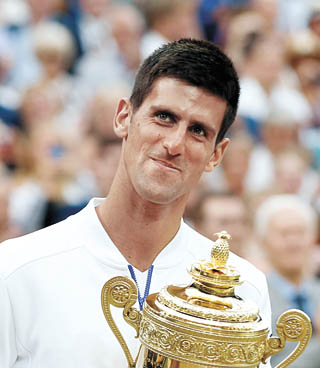 LONDON - A game away from a third Wimbledon championship and ninth Grand Slam title, Novak Djokovic sized up a 108 mph serve from Roger Federer and stretched to smack a cross-court forehand return winner.

Two points later, Djokovic again took the measure of a serve from Federer, this one at 123 mph, and delivered a down-the-line backhand for another return winner. After this one, Djokovic bellowed.

“I roared because I felt like that’s the moment,’’ Djokovic would say later. “Now is the time for me to close this match out.’’

“It feels, obviously, good when you make a return winner out of Roger’s serve on the grass,’’ Djokovic said, “but it doesn’t happen too often.’’

Over the past three seasons, Federer has reached two Grand Slam finals - both at Wimbledon, both against Djokovic, both losses.

“You sort of walk away empty-handed. For me, a finalist trophy is not the same,’’ a grim-faced Federer said.

“It takes a little bit of everything: recognizing the moment, having the good intuition, following your instincts of where the serve is going to go, being in the right balance,’’ Djokovic said. “I mean, it’s not that easy, especially with Roger’s precision and accuracy.’’

Djokovic’s serve was stout, too: He saved six of seven break points. On a windy afternoon, Federer was simply not the same height-of-his-powers player who defeated Andy Murray in the semifinals. Pressured by Djokovic’s body-twisting ability to extend points, Federer committed 35 unforced errors; Djokovic made 16. Federer and Djokovic have played 40 times; each has won 20.