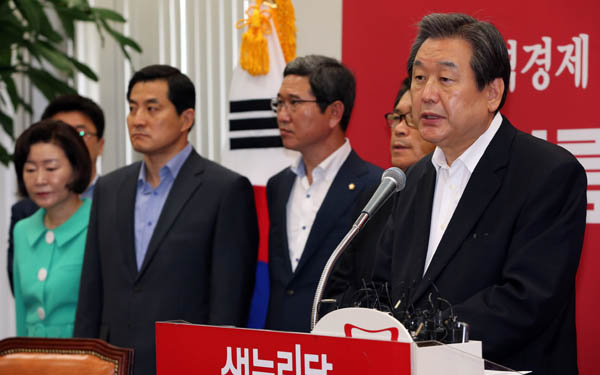 Kim Moo-sung, right, the chairman of the ruling Saenuri Party, holds a press conference in the National Assembly on Monday to mark the anniversary of his inauguration. By Kim Seong-ryong

The chairman of the ruling party encouraged the main opposition on Monday to join in his political experiment in introducing an open primary to field candidates for next year’s general elections.

At a press conference to mark the anniversary of his tenure as the Saenuri Party’s leader, Rep. Kim Moo-sung announced that his biggest goal is to obtain another victory in April’s legislative elections.

He added that an open primary and endless reform were both vital keys for success at the polls.

“For the next year’s general elections, I will achieve a ‘bottom-up’ nomination process at all costs and give nomination rights back to the party and the people,” he said.

Kim also went on to say that the main opposition New Politics Alliance for Democracy (NPAD) should join in the Saenuri’s plan to name candidates through an open primary.

“The opposition said it will make strategic nominations for some districts, while other candidates would be selected through a bottom-up process. But that isn’t enough of a change in the nomination system to satisfy the people. Once again, I propose to the opposition party that the ruling and opposition parties hold open primaries at the same time and on the same day.”

Last year, when Kim ran for the Saenuri Party chairmanship, he pledged that he would not wield his influence in a closed-door, top-down nomination process and promised to introduce an open primary. Pointing to his previous pledge, he credited nomination reform with bringing the ruling party two by-election victories, last year and this year.

The party will win again if this program continues, Kim said.

Calling the current nomination system “the root of all evil,” Kim argued that the political arena would be free from corruption and irregularity once nomination reform was complete.

His proposal to the NPAD appeared to be a defensive measure however, reflecting his concerns that the opposition would participate in the ruling party’s primary and vote for the weakest possible candidates for its own gain in the real races.

In response, the NPAD said that it was willing to consider holding open primaries at the same time to determine candidates for the legislative elections in April.

During the conference, Kim also said that his reshuffle of key party posts would be finalized today, adding that the appointments were aimed at party unity as well as wins at the polls.

“I’ve always believed that a Gyeongsang lawmaker for the Saenuri Party is a bronze medal, while a Saenuri lawmaker in the capital region is a gold medal. We can win an election only when we have the mentality and perception from outside the Gyeongsang region,” he said, referring to the conservative party’s traditional stronghold. “So all reshuffled posts will be filled with officials who are not affiliated with the region.”

Kim also addressed the latest rupture between the ruling party and the Blue House and promised improvements.

Angered with the Saenuri floor leader for striking a political deal with the opposition, President Park demanded that Rep. Yoo Seong-min be sacked. After 13 days of resistance, Yoo stepped down from his post last week.

Admitting to criticism that he had failed to follow through with his pledge that the relationship between the party and the Blue House would become more equal, Kim said, “I think there was a slight shortcoming, when we evaluate it by a score. But I did work hard for it, and it wasn’t as bad as described by the media.”

“I will continue to do my best for a horizontal relationship between the ruling party and the Blue House and to make efforts to say what I have to say,” he continued. “The communication with the Blue House wasn’t smooth in the past, but it has been very good lately.”

Earlier in the morning, President Park also touched upon the importance of restoring the cooperative ties between the Blue House and the Saenuri. During a senior secretariat meeting, Park said her newly appointed political affairs senior secretary, Hyun Ki-hwan, would be tasked with achieving that goal.

“It is an important job to smoothly mediate the Blue House’s relations with the ruling party and the National Assembly,” she said. “For him to perform his job, he must focus everything on the people.

“It is important for him to move beyond his individual interests and partisan politics,” Park said. “He must resolve problems truthfully and forthrightly.”

Park appointed Hyun as her new political affairs senior secretary on Friday, filling the position after a 54-day vacancy.

Hyun, a 56-year-old Busan native, served as the external cooperation chief for the Federation of Korean Trade Unions before joining the Grand National Party, the predecessor to the Saenuri Party. He was elected as a lawmaker in 2008, but chose not to run for reelection in 2012, working on the ruling party’s nomination committee.

However, he was later expelled from the Saenuri on charges that he took 300 million won ($265,194) in bribes to give out a nomination. Hyun was subsequently cleared by the prosecution and rejoined the party in 2013.