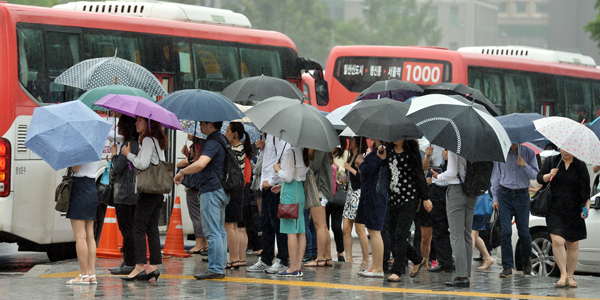 At an intersection near Gwanghwamun in central Seoul, pedestrians hold up umbrellas against the rain brought by typhoon Chan-hom. As Chan-hom leaves the Korean Peninsula, the stronger typhoon Nangka is poised to take its place.[NEWSIS]

As typhoon Chan-hom, which brought more than 1,400 millimeters (55 inches) of rain to Jeju Island, departs from the Korean Peninsula, typhoon Nangka is coming to take its place.

Nangka, which takes its name from a tropical fruit, is a medium-size typhoon with a central pressure of 955 hectopascals (hPa) and a maximum wind speed of 40 meters per second (89 miles per hour) as of Monday. The typhoon is notably stronger than Chan-hom, and the Korea Meteorological Administration forecasts that Nangka’s central pressure will decrease to 940 hPa by Wednesday, which will further strengthen the typhoon.

It is predicted that Nangka will be 460 kilometers (286 miles) east of Kagoshima, Japan, by 3 a.m. on Thursday, and it is expected to hit Honshu, Japan’s largest island, before making its way to the eastern coast of Korea. Forecasters anticipate that Nangka will bring rain, strong winds and high tides to places along the eastern and southern coasts of Korea, including the Dokdo islets, starting this weekend.

“Nangka’s course and degree of development may shift due to regional pressure changes in Korea,” explained the forecast authority.

Separate from Nangka, the 12th typhoon of the year, Halola, which is currently near Hawaii, is also fast approaching. It is forecast to arrive in waters 2.4 kilometers east of Guam around 9 a.m. on Thursday.