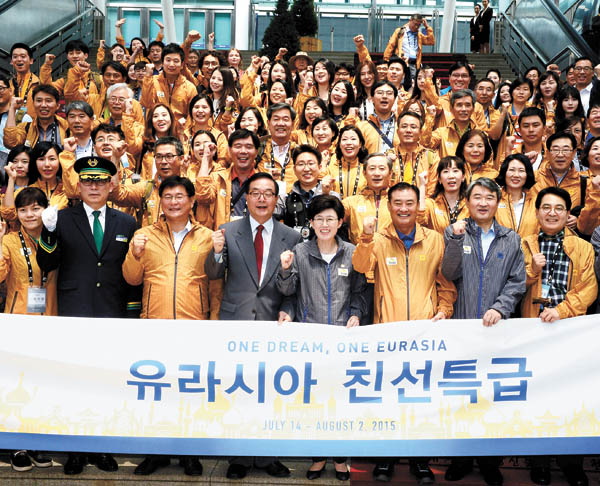 A group of officials kick off the 20-day Eurasia Friendship Express, a railway journey that will take 250 Koreans 14,400 kilometers (8,948 miles) across six countries, at a symbolic launch at Seoul Station on Tuesday. [NEWSIS]

A group of 250 Koreans embarked Tuesday on a 20-day journey on the “Eurasia Friendship Express,” a railway project that will take the group, a mix of public officials and people from the private sector, 14,400 kilometers (8,948 miles) from Asia to Europe with a message of peace and unification.

The Eurasia Express, a joint project between the Ministry of Foreign Affairs and Korea Railroad Corporation (Korail), is symbolic of President Park Geun-hye’s Eurasia Initiative and Korea’s hope for a transcontinental railroad running from South Korea through North Korea, Russia, Central Asia and onto Europe.

A symbolic launch was held at Seoul Station in downtown Seoul, where participants - including politicians, businessmen, academics, cultural leaders and university students - gathered from cities across the nation, including Busan and Mokpo, South Jeolla. Participants also included descendants of Korean independence activists, including relatives of Ahn Jung-geun (1879-1910).

But then 200 flew to Vladivostok, Russia, for a rail journey that will take them through Khabarovsk, Irkutsk, Novosibirsk, Yekaterinburg, Moscow, Warsaw and Berlin.

The remaining 50 flew to Beijing for a route that goes through China and Mongolia before it joins the first group in Irkutsk.

At the ceremony, First Vice Foreign Minister Cho Tae-yong said, “The Eurasia continent for a long time has been a location that our people have held great ambitions for. The Eurasia Friendship Express is a means to open a route again to the vast Eurasian continent and revive the long-held dream of our people.”

He continued, “For decades, the Korean Peninsula has become an island, and this is an important first step in the process of giving birth to a route linking once more the Eurasian economic bloc and the Asia-Pacific economic bloc.”

The group held a banner with the slogan “One Dream, One Eurasia.”

A seminar on the Eurasia Initiative will be held in Beijing, and at stops along the way, there will be a Korea-Russia music concert, diplomatic celebrations, promotion of Korean food and K-pop and civilian exchanges. The final stop in Berlin will include a Korean and German university student debate on unification and an automobile seminar.

Foreign Minister Yun Byung-se is expected to join the group later in the summer on the final Warsaw-Berlin leg of the route.

In a video message at the ceremony, President Park Geun-hye said, “This expedition is one that holds the desire and dreams of our people for unification.”

She continued, “That dream is for the history of the past 70 years, which divided North and South Korea, to end. And through communication and linking with the vast Eurasian continent, we will move toward a future of unification.”

The group will stop at major points on an envisioned Silk Road Express and hold events to promote trade, cultural and diplomatic exchanges.

The idea of the Silkroad Express is to link Korea with major railroads, such as the Trans-Siberian Railway, Trans-China Railway and Trans-Mongolian Railway.

But the railway would have to pass through North Korea.

The project coincides with the 70th anniversary of the end of World War II and the liberation of Korea from Japanese colonial rule from 1910 to 1945.

This year, Korea marks the 25th anniversary of diplomatic relations with Russia and Mongolia.