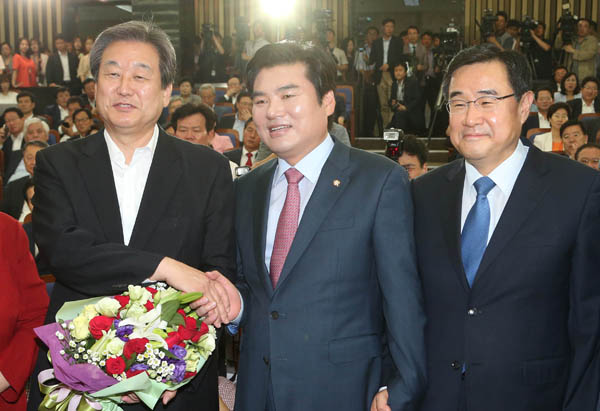 Saenuri Chairman Kim Moo-sung, left, and ruling party lawmakers congratulate Rep. Won Yoo-chul, center, who was selected as its new floor leader, and Rep. Kim Jung-hoon, who was chosen as the new chief policy maker in a general assembly of Saenuri lawmakers on Tuesday. By Kim Kyung-bin

President Park Geun-hye and Saenuri leaders will meet on Thursday as a first step in repairing the broken ties between the Blue House and the ruling party.

Following a meeting with Park’s newest aide, Saenuri Chairman Kim Moo-sung confirmed on Tuesday that he would meet with the president at the Blue House.

“The party chairman, the floor leader and the chief policy maker will go,” he said.

Hyun Ki-hwan, who was appointed on Friday as the presidential senior secretary for political affairs, paid visits to the leaders of the ruling and opposition parties in the morning. After a 35-minute meeting, Kim told the reporters that he would visit the presidential office on Thursday with the newly appointed floor leader and the chief policy maker.

The talks Thursday will be the first conference between the Blue House and the ruling party in two months. The last such meeting took place on May 15, when the Saenuri chairman, the presidential chief of staff and the prime minister gathered to discuss reforming the pension program for civil servants.

Earlier in the morning, the ruling party convened a general assembly of lawmakers and named Rep. Won Yoo-chul, its former chief policy maker, as its new floor leader. Rep. Kim Jung-hoon was chosen as the new chief policy maker to succeed Won.

The floor leader position was left vacant after Rep. Yoo Seong-min was forced to step down on July 8 following a feud with President Park. The president criticized Yoo for striking a political deal with the opposition party and demanded the Saenuri’s chief negotiator be replaced. After nearly two weeks of resistance, Yoo resigned as ties between the Blue House and the ruling party became severed.

In his acceptance speech as floor leader, Won said his top priority would be restoring the relationship between the party and the Blue House.

“The party, the administration and the Blue House are like a trinity,” Won said. “The Republic of Korea can succeed only when the Park administration succeeds, and that will give the Saenuri Party a future. Without the success of the Park government, we cannot guarantee our victories in the general elections in the next year and the next presidential election.”

Vowing to restart suspended policy coordination meetings with the Blue House and the government as soon as possible, Won promised to push forward the Park administration’s major agenda items and follow through with its economic policies. He also vowed to work with the opposition, referring to them as important partners in state affairs.

However, Won stressed that he would not make unprincipled compromises and promised to create a team to monitor how the pledges by Park and the Saenuri Party in past elections were being implemented to restore public confidence in the government.

In cooperation with the new chief policy maker, Won also said he would establish another team to draft pledges for April’s general elections.

The new floor leader’s promise showed that the ruling party has already started its preparation for the next legislative elections.

In his speech on Monday to mark his anniversary as Saenuri chairman, Kim made clear that his goal would be a victory in the next election.

Kim also carried out a reshuffle of other key party posts on Wednesday, once again with a focus on the polls - he ruled out politicians from Gyeongsang, the traditional stronghold of the ruling party, in the new appointments in order to expand the Saenuri’s influence in the capital region.

Hwang is a three-term lawmaker representing Paju, Gyeonggi. The former Army general entered politics in 2004 and is currently serving as chairman of the National Defense Committee. If he accepts the post, he will have to give up his position as committee chairman.

The secretary general and his deputies are tasked with overseeing the nomination process for next year’s general elections. Kim has promised that he will field candidates through an open primary and vowed to win more seats in the capital area via nomination reform.