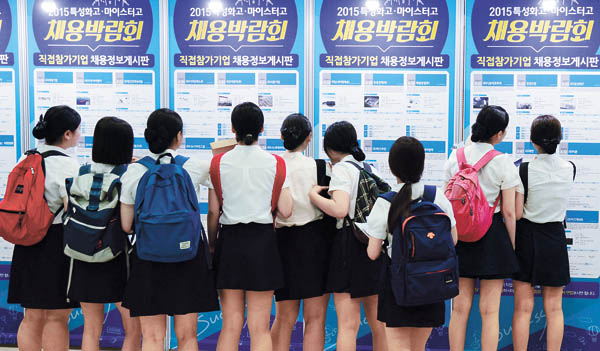 High school students look at a job bulletin board at a job fair held at Bexco in Busan on Tuesday. [NEWSIS]

The number of people with jobs rose by 329,000 in June, a slower pace than in May, when it grew 379,000, according to a report by Statistics Korea. Job growth in the services industry, which was hit hardest by the outbreak, contracted in June. The number of newly employed people in service jobs was 282,000, falling from an increase of 315,000 in May.

“Due to anxiety over MERS, consumer consumption, tourism and leisure shrank, reining in job growth overall,” said Shim Won-bo, a Statistics Korea official, at a briefing.

The number of jobless people also climbed to about 1.05 million in June, up from 1.02 million a month earlier. The overall jobless rate was 3.9 percent, rising 0.4 percentage points year-on-year.

The jobless rate for people between the ages of 15 and 29 also hit double digits, at 10.2 percent, rising from 9.3 percent in May.

Although it was lower than February’s record of 11.1 percent, officials said it was rare for June to see such a high youth jobless rate.

“Unlike earlier in the year, when students graduate and job openings are starting to be filled, it is rare for June to show such a high rate,” said a Finance Ministry official. “In fact, the youth jobless rate in June was a record for the month since it reached 11.3 percent in June 1999.”

The government-controlled quarantine for MERS, which kept many people from going to work, led many people to leave jobs temporarily, the statistics showed.

The number of employees who temporarily left work in June stood at 369,000, rising from 289,000 in May, according to the statistics.