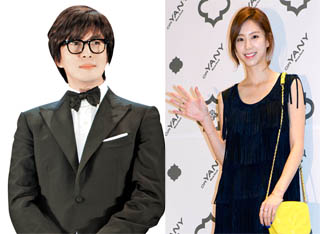 Actor Bae Yong-joon, 42, and actress Park Soo-jin, 29, who are holding a wedding on July 27, have flatly denied rumors regarding the 29-year-old’s pregnancy.

“The date of the ceremony had been scheduled after discussion with each celebrity’s parents, and therefore has nothing to do with Park’s pregnancy - that is not even true,” commented a person involved with KeyEast Entertainment, the agency that Bae and Park belong to, on Wednesday.

In response to the couple’s announcement of their wedding date on Tuesday afternoon, rumors spread that the actress is pregnant. People speculated about the pregnancy because the date of the couple’s wedding is much earlier than the date that the couple previously announced, which was around September.

In fact, a Korean media outlet reported on Wednesday that Park is currently pregnant, after which the celebrities’ agency initially threatened legal action against the media outlet. However, the parties apparently resolved the issue without getting the law involved.

Bae and Park are scheduled to hold a private wedding at the Sheraton Grande Walkerhill Hotel and will go on a honeymoon within the country.