A constitutional revision gets the go-ahead at last

A constitutional revision gets the go-ahead at last 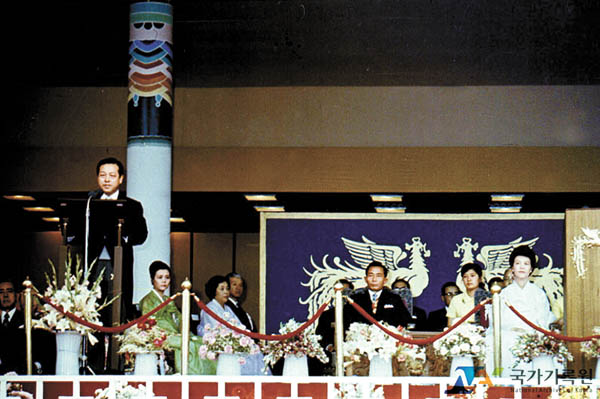 Prime Minister Kim Jong-pil, left, speaks at President Park Chung Hee’s third inaugural ceremony on July 1, 1971, at the Capitol building. In his third term, Park amended the Constitution, which limited presidents to two terms. “Park could be elected again because the people hoped for restoration, modernization and unification of the country,” Kim said. [National Archives of Korea]

In early 1969, the most serious political issue was the revision of the constitutional law, which allowed the president a third term. At that time, I was away from the political circle, but I was opposed to the revision for three primary reasons. I aimed to pass down the lessons of the April Revolution [the popular uprising in April 1960 by labor and student groups that led to the resignation of Syngman Rhee]; to keep the purity of the May 16 Revolution; and to let President Park Chung Hee be respected and remembered as the leader of that revolution.

The leaders of the Democratic Republican Party (DRP), who were pushing for the revision, were being criticized by their fellow lawmakers. Reps. Yang Sun-jik, Ye Chun-ho, Park Jong-taek and Shin Yun-chang insisted that the revision must not be made in order to leave Park’s name in history and pursue democratic order.

I met with Yang, Park and another lawmaker, Kim Taek-su, in Hannam in late February. There, we all denounced the constitutional revision.

“I’m against the revision at the very least because of democracy and President Park,” I said. 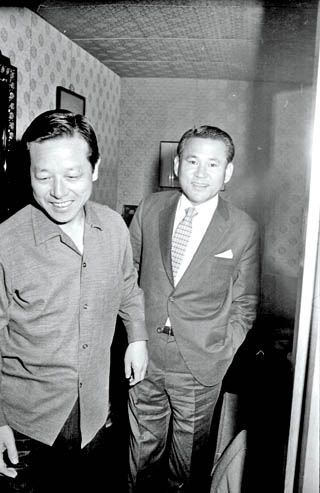 Even though I wasn’t a party member, my remarks became leverage for the DRP representatives against the revision, and they began to prepare a signature-seeking campaign.

Afterwards, I stayed in Japan for about two months while my wife sought medical treatment. Meanwhile, the conflict escalated between those who were for and those who were against the revision.

Park ordered the ruling DRP to vote down the opposition-led dismissal of Education Minister Kwon Oh-byeong, but more than 40 DRP lawmakers voted for the bill and eventually ousted Kwon. It was the first time they had disobeyed Park since he was sworn in. It was mainly led by those against the revision, five of whom were expelled from the party for their insubordination.

In July 1969, as I was living a somewhat secluded life at home in Cheonggu-dong, Lee Hu-rak, the presidential chief of staff who constantly provoked me when I served as the DRP chairman, abruptly paid me a visit. With the situation turning unfavorably, he said he needed me to persuade those who were against the constitutional revision to change their minds.

“President Park wants you to come to the Blue House,” he said.

“Is it his will or did you suggest it?” I asked warily. “I’m not coming if you’ve planned all this.”

Lee told me it was Park who wanted to talk to me, so I followed him to the presidential office.

When I arrived, Park was there at the door to greet me. Lee did not come in.

After I said hello and sat down, he asked me, “How have you been?”

“I’ve been at home mostly,” I replied.

“You must have heard about how the situation is going,” he said. “What do you think of it?”

I had to be honest.

“I know you’re upset by the lawmakers against the revision, but I assume they believe in this for the sake of the country, not to disobey you. Trust me. They’re doing it from the heart, not to bring me back into politics.”

“You’re all I got,” he said. “Who else is going to help me if it’s not you? Please help me and let me do some of the remaining tasks. I’m just asking for one more term. Is that too much for you?”

He approached me, held my hands and continued, “Hey, we risked our lives together to start the revolution, and now you’re going to live alone? We managed to eradicate poverty in the ’60s, and we now need to pave the way to become an advanced country by boosting the heavy chemical industry in the 1970s. Let’s go together.”

His eyes were filled with tears.

I closed mine and thought of the day we had decided upon the revolution in our jeep. Since I had once been willing to risk my own life for the revolution, I couldn’t easily shake off his hands.

But I couldn’t easily give him an answer, either.

After a long silence, he let go and said, “Then think about it and we will talk later.”

He called me a few days later. He came out with a black jeep and asked me to play golf with him at the New Korea Country Club. I was in the back seat with Park and Deputy Chief of Staff Shin Dong-gwan seated in the passenger’s seat. A few bodyguards were following behind us in another vehicle.

“So did you think about it?” Park said.

“I’ve been thinking, but it can’t be justified and I still can’t rationalize it,” I answered.

“It doesn’t need to be justified,” he said. “What we do is justice.”

Park brought up the revolution again.

“We started a revolution together, which was intended to overhaul order and the systems of the past and create a new world. In the spirit of that, shouldn’t we revise the constitutional law to allow not just a third term, but also a fourth term?”

“You are correct,” I said. “I agree that we shouldn’t care about little ups and downs, and I think you are the only person who can properly rule the country. But revising the Constitution is a much harder thing to do.”

“It’s hard, and that’s why I’m asking you to take the lead,” Park replied.

We didn’t discuss the revision while we played golf or had dinner. On the way back, he again shared his ride and we had the same discussion.

After long consideration, I gave him my answer, saying “Yes, if you want it so bad.”

He and I were practically blood brothers. He was uncle to my wife, Park Yeong-ok, so I had no choice. It took me three times to finally say yes to the decision.

The president looked relieved. “Now I want you to persuade the public. They will listen to you. Please.”

I could no longer resist. He was determined to revise the Constitution and continued on no matter the circumstances. The president wanted to modernize the country, so I thought it was only right for me to help him.

Knowing that supporting the revision would be an even bigger pain than opposing it, I choose that way as a revolutionary comrade.

“I’ll be with you until the end,” I told Park as I left his office.

Some people wondered whether I had been given any advantage for changing my mind, and it was rumored that I would be his successor. But that wasn’t true, and I’ll probably have a chance to talk about his successor.

But what I can tell you is that there was nothing shady, and I wasn’t forced. I have a special bond with Park in that we had to take responsibility together, having fought side by side in the revolution.

Based on our relationship, I couldn’t just refuse Park’s request, and that’s the truth behind me supporting the revision.