Korea’s average mobile telecom bill is the eighth-cheapest among the 34 Organization for Economic Cooperation and Development members, but more expensive than some European countries like Iceland, France and the United Kingdom. But the news makes local service providers feel put upon.

According to the OECD’s biennial Internet Economy Outlook report released on Thursday, Korean telecom carriers last year offered a small monthly plan, with 50 minute of voice calls, 100 text messages and 100 megabytes of data access, at an average cost of $10.84. That price was lower than the OECD’s average, $17.72, but nearly $3 more expensive than the least expensive nation, Iceland.

The OECD compiled its rankings using purchasing power parity calculations. It excluded portions of cell phone bills that covered payments for the phone itself.

The Korean telecom fees were lower for the economy plan compared to 2012, when the survey said telecom carriers charged $15.79 on average, putting this nation in 14th place. 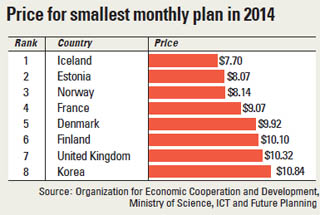 Across all plans, Korean telecom fees fell by an average 35 percent during the same two years. Across all OECD members, cell phone users saw a 23 percent drop in the average bill.

Korean phone users had the OECD’s second-least expensive bundle of integrated telecom services available to them; the least expensive ones were in France.

The Ministry of Science, ICT and Future Planning and the local telecom industry say the reduction in phone bills was the result of the Park Geun-hye administration’s aggressive push to reduce households’ telecom spending through policies like the elimination of registration fees. Reducing household telecom spending was one of Park’s presidential campaign pledges in 2012.

That doesn’t make the industry happy. Phone and Internet service providers believe they bore the brunt of Park’s push to cut communications costs for families. They unhappily offered unlimited voice plans and “roll your own” plans beginning in 2013.

“The OECD study showed that Korean telecom service fees are cheaper by up to 39 percent,” Lee Se-yoon, a spokesman at the Korea Telecommunications Operators Association, told the Korea JoongAng Daily. “The statistics show that the Korean telecom fee, excluding the device price, is not expensive at all.

“Most of the telecom spending reduction burden was put on us in the telecom industry, while there have rarely been changes in mobile device prices during the same time.”

Analysts tend to agree that Korean mobile fees are indeed cheaper than in other countries, saying the reason why households feel stress when they pay their monthly telecom bills is the phone price embedded in them. The OECD data seems to confirm that.