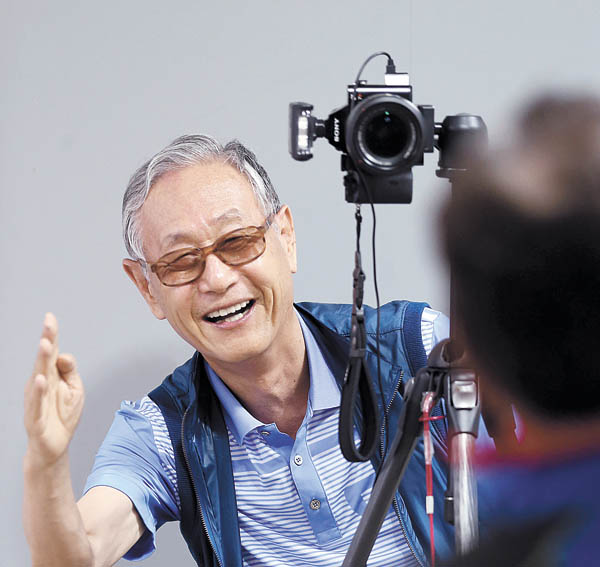 Kim Gwang-an, 78, shoots a portrait on July 7 of an elderly man at Jongmyo Park in Jongno District, Seoul. By Shin In-seop

On a recent afternoon in Seoul, a group of elderly Koreans came walking around a blue parasol in Jongmyo Park in Jongno District, where Kim Gwang-an, 78, and his wife Park Yeong-ja, 74, came outside to usher them inside a nearby building.

Kim keeps a small studio there - a modest space set up with just a small fishing chair, a tripod and a camera.

“Mr. Kim, I came here for my funeral portrait,” said An Sang-bo, the first customer of the day, as he sat down. “This is my last portrait, so I hope you do it well.”

As he was photographed, the 79-year-old continued to comb his hair, making sure not even a single strand was out of place.

Since September, Kim has taken free funeral portraits of hundreds of elderly, having photographed some 760 people so far.

In Korea, it is customary to place a portrait of the dead at mourning altars where visitors can pay tribute with either flowers or incense. The portrait is also used in funeral processions.

After finishing up with his first five customers, Kim showed some of his shots to this reporter.

“Through the viewfinder, their faces look different, like they have a different life,” he said.

After graduating from Seoul National University in 1965, Kim got a job working at a construction company. He then served as a branch manager in the Middle East for Daelim Industrial, eventually becoming the deputy chief director at the headquarters in Korea. But throughout all his travels, photography was merely a hobby.

“My pocket used to be filled with my business cards,” he said, “every time. Photography was just a hobby.”

Then, last winter, he noticed changes in himself. His face was wrinkled and his hair had turned gray.

“I noticed I had become old,” he said. “It was a weird [realization] at the time.”

So with his camera in tow, Kim, 78, went to Jongmyo Park, where the elderly often gather. One man was drunk and yelling belligerently; others sat quietly on the benches.

These people, he thought, were probably once fathers and husbands to someone, yet here they were, in the park and isolated from the rest of the world.

According to data from the Ministry of Health and Welfare, the number of single elderly people in the country stands at about 1.37 million. And in 2013, a survey by the Seoul City Government showed that more than 250,000 seniors lived alone in the capital city.

“If the single senior population in Korea has surpassed 1.37 million,” Kim said, “that means there are numerous people abandoned by their families, suffering from diseases and lacking a place [in our society].”

That idea, he added, was what originally motivated him to begin taking funeral portraits for free. He also wanted to do something to help those in the final years of their lives.

When Kim first started, some expressed their surprise, but word of his small studio eventually spread and even Kim’s wife helps out, not wanting him to borrow trouble after years of working.

Later on Tuesday, the photographer was down to his last customer for the day, an 86-year-old man surnamed Cha, who wore newly purchased clothes and had braved the hot weather to come in. The gentleman admitted he had never thought of having his portrait taken before.

“I once thought about committing suicide,” he said. “I don’t have relatives who would come to my funeral … so who would remember me? But after seeing Mr. Kim, I’ve changed my mind. I want to leave a lasting impression.”