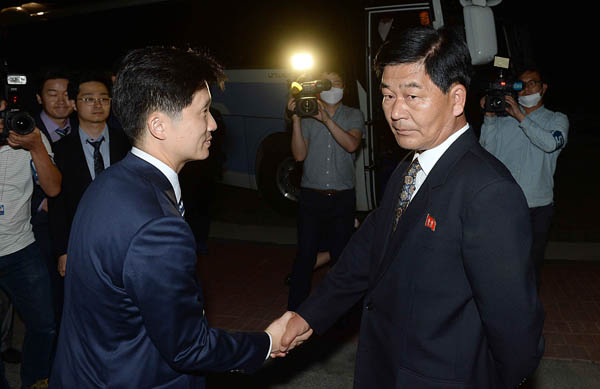 Multiple rounds of negotiations between the two Koreas on wages and other issues involving the Kaesong Industrial Complex collapsed early Friday morning after North Korea’s envoys stormed off.

On Thursday through Friday, the joint committee managing the industrial complex held its first meeting in 13 months, and the two sides met for five sessions through both days.

North Korean chief envoy Pak Chol-su angrily left the meeting, saying the committee is completely useless and that he would never come back to negotiate.

“We regret that we could not reach any agreement as North Korea did not sincerely engage in the issues that would eventually lead to development of the complex,” said South Korean head envoy Lee Sang-min after the last session. “But it is still meaningful that the joint committee of the two Koreas shared opinions on current issues.”

The key topic in the meetings was wages for North Korean workers at the complex. Last November, the North unilaterally announced it was revising 13 items in the operational regulations, including abolishing a cap on wage increases.

The regime said it was going to raise the monthly minimum wage by 5.18 percent, from $70.35 to $74. The cap on wage increases was five percent annually. South Korea objected to the North’s decision.

The Ministry of Unification blamed the North for maintaining an inflexible posture on the issues.

“It’s meaningful that we had talks after a long time, but North Korea needs to work more for development of the complex,” said ministry spokesperson Jeong Joon-hee on Friday. “We’ve been flexible enough and said that we could accept a 5.18 percent wage increase even though both sides previously agreed on five percent.”

“But we also suggested that we could accept the offer if the North agrees on other issues,” Jeong continued, “such as wage system reform, communications and customs and improving the working environment at the complex.”

The ministry said it was not taking the comments of Pak, the North’s chief envoy, seriously.

“Pak knows that they need the committee for the complex and its global competitiveness,” spokesperson Jeong said. “He may have said something to vent his anger, but we don’t assume it’s the basic posture of North Korea on the committee.

“The next meeting will be held naturally when the atmosphere allows.”