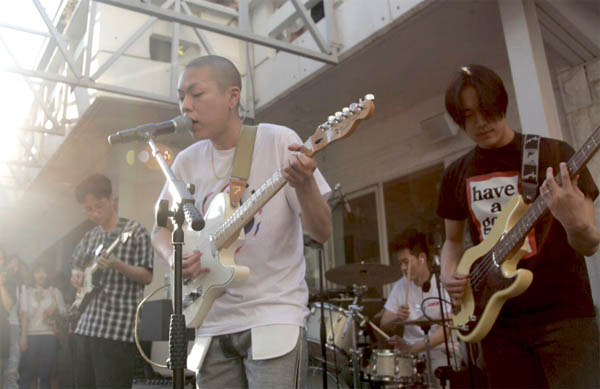 The indie band Hyukoh may be a young band, but after appearing on MBC’s flagship reality program “Infinite Challenge” in the first week of July, the group has risen to arena status.

With hits including “Comes and Goes,” “Hooka” and “Wi Ing Wi Ing,” the band has joined the league of the nation’s hottest K-pop acts, such as Big Bang, Girls’ Generation and Sistar, whose catchy songs are often guaranteed chart-toppers.

Hyukoh’s last record, “22,” released in May, even broke into the Top 10 of the Billboard World Albums Chart, ranking No. 7 on July 10.

But while some in the online community argue that Hyukoh’s dominance on the music charts - Naver Music and Melon - was influenced solely by the group’s appearance on the hit variety program, others claim the group’s musical talent is the driving force behind their newfound stardom.

Some of Hyukoh’s newest fans have gone so far as to express their gratitude to “Infinite Challenge” for introducing them to “Korea’s Maroon 5.”

The band’s style of music and their hit tracks have been described as dreamlike, with a quality that makes listeners feel like they’re taking a walk in the clouds.

But although Hyukoh’s music may seem new and fresh to most, their tracks came out at least two months ago - “long enough to make the songs too old to rank No. 1 in the current music charts,” according to music critic Kang Tae-kyu.

In the past, several tracks, such as EXID’s “Up and Down” and Baek A-yeon’s “Shouldn’t Have,” have gradually climbed their way up weeks after their initial release. 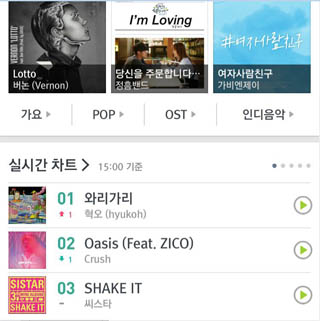 EXID, who attained overnight stardom after a video of group member Ha-ni dancing suggestively spread across social media, instantly caught the public’s eye thanks to the visual appeal, Kang explained.

Culture critic Kim Heon-sik added that Baek, on the other hand, was able to reverse up the music charts “because her name was already well-known after she appeared in season one of [popular audition program] ‘K-Pop Star.’”

But those reasons don’t hold true for Hyukoh, who weren’t widely known before “Infinite Challenge” and aren’t famous for looking handsome.

“In such a fast-paced music industry, reversing back up the music charts is extremely rare,” Kang said. “Hyukoh, however, was able to achieve that thanks to their fresh sound as well as the band’s solid fan base.”

With the help of “Infinite Challenge,” “they were able to become popular overnight because the band already had loyal fans, mostly in the Hongdae area in western Seoul,” where they’ve consistently performed since their debut.

Despite such little publicity before their appearance on the program, their musicianship has been rated highly by listeners and fellow musicians alike.

A number of renowned acts, including Yoo Hee-yeol, Lee Juck and IU, who appeared on the same episode as Hyukoh, all introduced the indie group as “the hottest band in Korea right now.”

According to Kang, their success is far from surprising given that they possess two important qualities the public expects from musical acts.

“The public wants something new because they’re tired of all the same old tracks they’ve been listening to over the past few years.”

Kang described the chances of hitting No. 1 on the music charts as slimmer than winning at a casino, as the material must at least have publicity or a following for the sake of the average person’s understanding.

“In that sense, Hyukoh, whose music is both fresh and was known [mostly outside mass media], naturally could have carved out their name,” he said.

Kim also pointed to Hyuko’s unique character as the primary reason for their current success, but wasn’t shy in acknowledging that “Infinite Challenge,” which has gained a solid viewership over the past decade, also played a significant role. 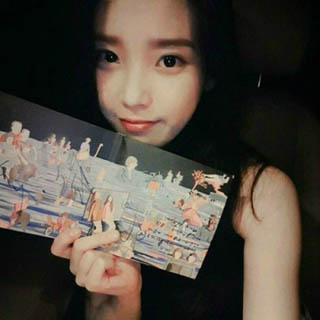 Soloist IU, admitted to being a huge fan of the band and posted this picture online in which she’s holding their album jacket photo.

“I think the band’s unique character played just as crucial a role as their musical ability,” Kim added. “These days, most singers come out in idol groups or as spin-off solo acts. Hyukoh, however, approached the public in band form, [which isn’t common among the younger generation].”

Regarding their young age - the four all range between 21 and 22 years old - he noted, “The bands this age usually appear on audition programs like ‘Superstar K’ or ‘K-Pop Star,’ not ‘Infinite Challenge’ [which by comparison wields much more influence than the former].”

“It’s surprising that such young musicians can take on the independent movement.”

The group’s image also lent itself perfectly to the show, the culture critic said.

“The hosts of the program possess average looks,” he said, implying that the show’s regular viewers are used to and even fond of that aspect.

“As a result, the program’s fans were attracted to Hyukoh’s average looks, not to mention their unique character and musicianship.”