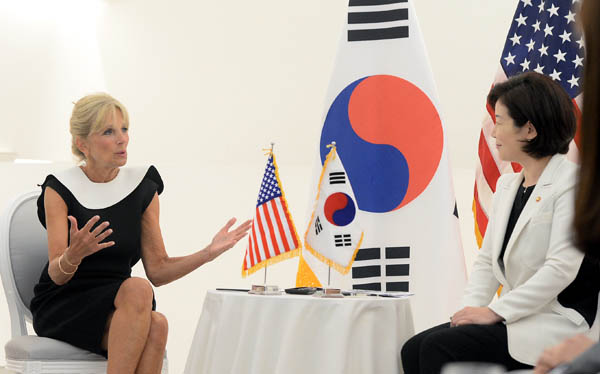 Dr. Jill Biden, left, speaks of women in leadership roles with Korean Minister of Gender Equality and Family Kim Hee-Jung, right, at the Dongdaemun Design Plaza in Seoul on Saturday.[NEWSIS]

Jill Biden, an English professor and wife of U.S. Vice President Joe Biden, emphasized the necessity of female empowerment in society and the workplace with Korea’s Minister of Gender Equality and Family Kim Hee-Jung on her first visit to Seoul on Saturday.

This two-day trip marks the first time a “second lady” of the United States has made a visit to Korea.

“President Barack Obama, first lady Michelle Obama and my husband, the vice president, have worked to empower women in the workforce and to shape every level of our government so that their voices are heard throughout society and all around the world,” Biden said at a reception held at the Dongdaemun Design Plaza hosted by the Ministry of Gender Equality and Family.

“To see those same efforts made in the Republic of Korea shows how far we’ve come, not just as women in individual nations but as a global community of men and women, to gain full gender equality.”

The reception, held at the ongoing “Esprit Dior” exhibition in Dongdaemun District, central Seoul, was attended by a group of some 100 female leaders of society, in culture, business, politics and the military.

It was Biden’s first visit to Korea as she kicked off a four-country Asia tour that also takes her to Vietnam, Laos and Japan.

As a lifelong educator, Biden highlighted that women’s empowerment is always a priority for her and especially emphasized the role of education in raising the status of women.

Biden, an English professor at Northern Virginia Community College who holds two masters’ degrees and a doctorate degree, is thought to be the first “second lady” of the White House to hold a full-time job.

“My travels across Asia will focus on the power of education and the value of leadership roles and business opportunities for women in the workplace,” she said. “I’m honored to start my travels in [Korea], which has been a close partner and ally of the United States for more than 60 years. Your country has set an example in Asia and around the world for responsible global development and good governance.”

She continued, “Young girls and women in the Republic of Korea excel in terms of education achievements but continue to face many challenges in the workplace.”

She added that it would take the effort of policy makers, as well as business, education and community leaders of both genders, to enable women to succeed.

Biden said she will teach an English language workshop in Vietnam and also meet with youths contributing to the growth of their country in Laos.

Ahead of the reception, Biden, accompanied by U.S. Ambassador-at-Large for Global Women’s Issues Catherine Russell, held a meeting with a delegation of Korean officials led by Gender Equality Minister Kim at Dongdaemun Design Plaza.

“Everyone in the world is interested in what engine will take us to the next stage,” said Gender Equality Minister Kim in her remarks at the reception. “I believe the greatest latent potential lies in women. Dr. Biden and I have agreed on this and we have a huge common interest on making a better future for women.”

Kim added that until the recent past, Korea was too busy to focus on catching up on women’s issues.

“But now, Korea has elected a female president and through the development of the country can talk about partnership, friendship and cooperation on women’s issues with the United States.”

Biden and Kim also toured the “Esprit Dior” exhibition, a collaboration of the French fashion house with six Korean artists.

Biden spoke with young children and mothers, and her staff handed out White House M&M’s in small white boxes.

She also met with female monks at Jinkwansa Temple in Eunpyeong District, northern Seoul, learning about the temple’s work in the local community, its history dating back to 1011, as well as the significance of temple cuisine, or sachal eumsik.