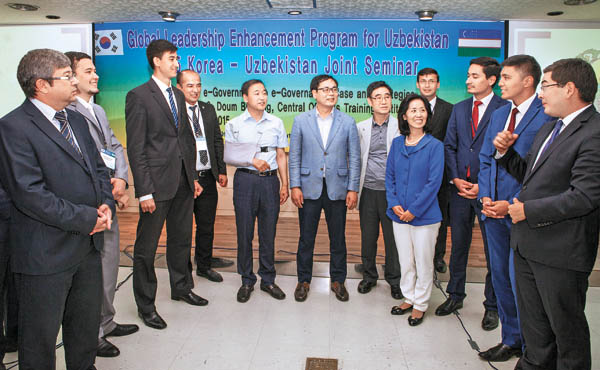 Officials from the Uzbek government and Korean ICT experts from the private and public sectors discuss how the Korean e-government system can be applied to Uzbekistan during the 2015 Korea-Uzbekistan Joint Seminar on July 9, at the Central Officials Training Institute in Gwacheon, Gyeonggi. By Park Sang-moon

The future of e-governance and the creativity found through information and communications technology (ICT) were at the center of discussions held by some two dozen Korean and Uzbek ICT experts in a seminar at the Central Officials Training Institute (COTI) in Gwacheon, Gyeonggi.

“Many people think that e-government is only with computers, typing something, and that we have to learn or teach people [about] computers. I think we do not need big skills. When the person is interested in something, you will learn it naturally,” Bobur Sagdullaevich Abdullaev, an official with Uzbekistan’s Ministry for Development of Information Technologies and Communications, told the Korea JoongAng Daily on July 9.

During the 2015 Korea-Uzbekistan Joint Seminar, held that day as a part of an ongoing training program, Abdullaev made a presentation with his group expanding on their vision of creative design with ICT and the future of an e-government system in their country. They specifically emphasized the importance and convenience of establishing a single information database.

The seminar was held under the theme, “From e-Government to e-Governance: Case and Strategies.”

Abdullaev, 28, the deputy head of the Information Resources Development Department in the Uzbek ministry, emphasized, “I think creativity is very important because developing countries always have to catch up to developed countries because they are also growing. So we have to create ideas and skip ahead.”

Abdullaev is part of a group of 13 Uzbek officials specializing in the information technology and communications sector who are participating in the ongoing six-month Global Leadership Enhancement Program for Uzbekistan.

The program, organized by COTI and the National Information Society Agency (NIA), kicked off on April 27 and will run until Oct. 9.

The Uzbek delegation is a young one, with an average age of 33.

“Young people usually catch up to new ideas very fast,” he explained. “And our government hopes that this delegation can catch up to all the ideas of e-government in [Korea], because you are ranked first globally in this area, and implement it in our country in the future.”

Participants that day included a group of Uzbek officials, who made presentations based on three months of e-government lessons and Korean ICT development, as well as domestic experts in the field from academia, government, IT companies and law firms.

They also discussed the links between ICT and “Hallyu,” or the Korean wave, and its proliferation through the use of social media, Internet marketing and streaming services.

“We’ve been chosen for this program by our government, and the first mission of this program is to study the Korean case of e-government development because Korea is the world leader in e-government matters. It has ranked No. 1 in [United Nations] surveys three consecutive times,” said Muzaffar Mukhitdinovich Djalalov, 29, who leads the Uzbek ministry’s ICT development strategy planning and IT convergence department.

He added that he was most interested in “big data issues” as head of strategic planning.

“We learned of Korea’s history of ICT development and e-government development and industrialization. Also, we visited a lot of government agencies, ministries and private organizations to get to know their working style, how their systems are integrated and how they use their resources and manage them,” Djalalov continued.

Over the past four months, the officials have attended lectures concerning online government history, services and policies, and visited top IT firms and government agencies to see how those plans were implemented.

From August, the group will take part in two-month internship programs across four agencies and local IT companies to learn how ICT can be applied.

“The seminar comes nearly three months since the group began training here and is intended to reflect what they have learned from the curriculum from COTI and NIA,” said Lee Yang-goo, the director general of the office of international training and cooperation at COTI.

“They already had expertise before coming here, but through their presentations today, they illustrated a bigger picture and that they understand the direction very well.”

He added that the seminar included representatives from governmental agencies, Korea’s provincial governments, law firms and a variety of companies with links to Uzbekistan.

In April 2014, COTI signed a memorandum of understanding (MOU) with the Academy of Public Administration in Uzbekistan to expand cooperation to strengthen the abilities of each country’s public officials. President Park Geun-hye made a state visit to Uzbekistan in June that year, when she and Uzbek President Islam Karimov agreed to deepen and advance the strategic partnership between both nations.

Lee noted that the Uzbek government financed more than two-thirds of the budget to run the program, an indication of how much importance it has placed on learning from the Korean experience in developing the e-government system.

Uzbekistan is home to some 180,000 Koreans, and the bilateral ties go back over two millennia.

“I think this program will be very useful in deepening relations between our countries,” Abdullaev said. “We already know a lot of Korean people. In the future, hopefully, when we become [more seasoned] government officials, we can use these connections we are developing now. We can serve as a bridge between Korea and Uzbekistan in e-government.”