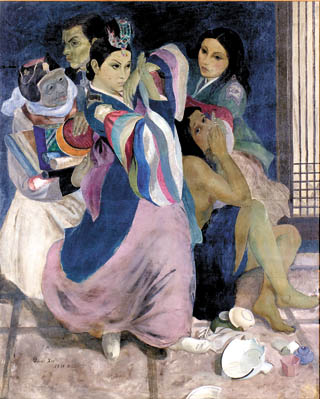 Lee Quede’s “Situation” (1938), combines Korean traditional elements and the Western style of allegory paintings. Unfortunately, nothing is known about the painting’s symbolism. Provided by the museum

To celebrate the 70th anniversary of Korea’s liberation from Japanese colonial rule, the National Museum of Modern and Contemporary Art (MMCA) is holding a special exhibition featuring the modern painter Lee Quede (1913-65). The retrospective starts today at the museum’s Deoksu Palace branch in central Seoul.

Why Lee, instead of more popular modern painters such as Lee Jung-seop or Park Soo-keun?

“It’s because Lee Quede, more actively than other artists, represented Korea’s political turmoil, deliberating on what is an artist’s social responsibility,” explained Kim Ye-jin, the curator of the exhibition. “In addition, not only his art creations but his life itself reflects the turbulent early-20th-century history of the Korean Peninsula.”

Lee ranked second next to video art pioneer Nam June Paik when the magazine Art & Culture recently made the list of the most important deceased artists of 20th-century Korea, based on a survey of 23 local art critics and historians.

But Lee had been consigned to oblivion for decades in South Korea, after he chose to live in the North after the 1950-53 Korean War. Until 1988, under the military regime’s anticommunist policies, it was forbidden to exhibit his paintings or even write about him.

Lee was not treated well in the North, either.

“Lee was beleaguered, as he did not keep pace with the Kim Il Sung regime,” art critic Yun Beom-mo wrote in an essay on the exhibition.

“Lee was a rare figure, who directly reacted to the influence of politics and power struggles but walked on the way of fine arts [instead of falling into political propaganda],” Yun added.

Lee gradually began to be rediscovered in South Korea with the end of the Cold War. A few years later, North Korea also started adding his name again on its list of artists, according to Yun. 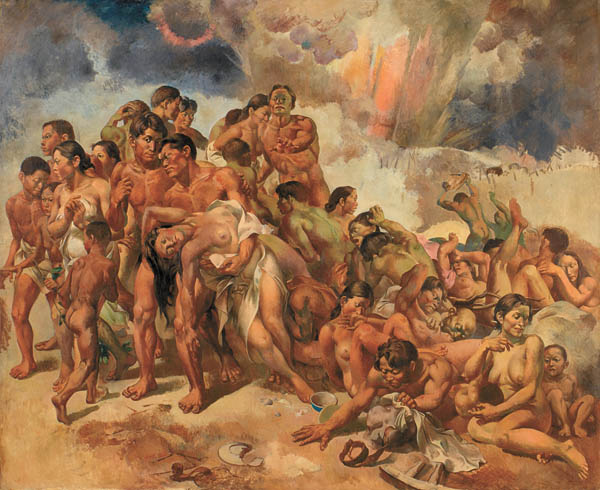 “Group of People IV” (1948) is part of his retrospective at the National Museum of Modern and Contemporary Art’s Deoksu Palace branch in central Seoul.Provided by the museum

The MMCA’s retrospective, titled “An Epic of Liberation ? Lee Quede,” features 400 pieces including his paintings and drawings and historical documents about him including photos and news articles. It consists of three sections.

The first section, “Depicting Love,” features Lee’s paintings from 1929 to 1937. Many of the exhibits are still lifes and portraits - in particular, portraits of his wife and muse, Yu Gap-bong. Most of the works were painted during his studies in Japan.

Whereas the earlier paintings reveal a heavy influence of French Impressionists and Post-Impressionists, the later paintings show the artist’s efforts to use Korean colors and styles in his paintings.

The efforts are heightened in the paintings from between 1938 and 1944 and displayed in the second section, “Searching for Tradition.”

During the period, Lee returned to Korea as a promising young artist and founded the Joseon New Artist Association with some other artists.

“Lee painstakingly strived to find out how to represent the color of Korean traditional clothing with the Western painting style and technique,” Kim said. 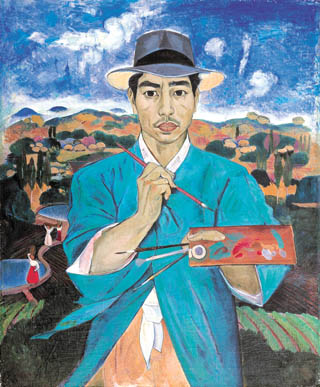 The third section, “Embracing an Era,” shows Lee’s paintings from 1945 to 1953, which carry his hope of “building up the direction of Korea’s new art, entirely free from the Japanese vestiges,” according to the museum.

He also wanted to show his vision of a new political and social system in Korea as well as that of new art through his paintings.

So he created large paintings, which were influenced by European grandiose historical paintings but also carry the colors of Korean traditional murals and the styles of social realism. But his experiment ended with the Korean War.