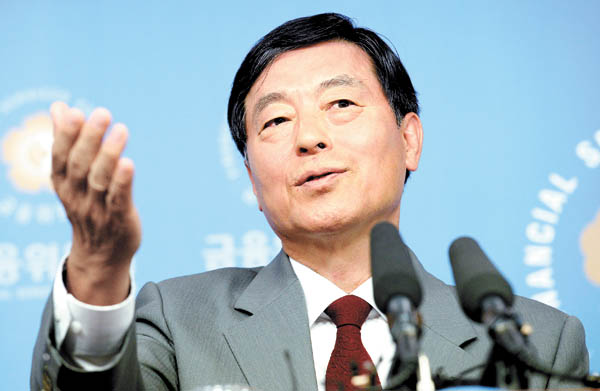 Park Sang-yong, head of the Public Fund Oversight Committee, explains the privatization plan for Woori Bank, which the government has been pursuing since 2010, at a press briefing held at the Financial Services Commission’s headquarters in downtown Seoul on Tuesday. [NEWSIS]

Woori Bank is back on the block, the government’s fifth attempt to sell its 51 percent stake since 2010.

This time, the government has given up any hope of selling a 30 percent stake to a single buyer.

Instead, it plans to split 30 to 40 percent of the bank into small parcels for sale to multiple investors, who will jointly manage Korea’s second largest bank by assets.

The government will eventually sell the remaining stake of 10 to 20 percent to even smaller shareholders, with no role in managing Woori. 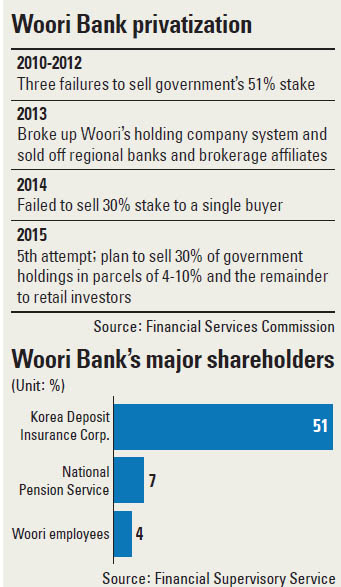 “We have confirmed that for the time being, it would be difficult to sell the shares with [single] management rights and that there is some interest in oligopolistic control,” said Park Sang-yong, who heads the government’s Public Funds Oversight Committee. “Considering such market conditions, we have decided to make public our attempt to sell the shares to multiple investors.

“Through this method, we expect to attract more interested buyers.”

According to the Financial Services Commission, the government will sell 30 to 40 percent of Woori’s shares to multiple buyers. The maximum stake for each buyer will be set at 10 percent and the minimum will be 4 percent. The multiple shareholders will exercise management rights to the bank jointly.

The remaining shares will be sold to individual investors who will hold no management rights.

Park, however, didn’t give exact details on when bids will be accepted or any other time frame.

The government will likely hold on to the balance of the shares for a while, since it wants to sell them when their value has risen, which it hopes will happen after the sale. The goal is to earn as much for government coffers as possible. Recently, Woori Bank’s shares have been falling.

“At any standard, Woori Bank’s share price is considerably undervalued when compared to other commercial banks,” Park said. “Woori Bank needs to make its own efforts to help raise its corporate value and its share prices.”

Park stressed that the government will not intervene in management after the sale is completed.

“In our survey of potential buyers, we have found that there were several potential participants who raised doubts on whether the government will continue to get involved in management after the sale of Woori Bank is done,” Park said. “To clear such suspicions, the government will make improvements on the MOU (between the Korea Deposit Insurance Corp. and the bank promising to normalize management) to guarantee full independence for Woori Bank’s management.”

The Korea Deposit Insurance Corp. owns the 51 percent stake, while the second-biggest shareholder of the bank is the National Pension Service, which holds 7 percent.

Although the government is crossing its fingers on the sale, the market’s response seems lukewarm. It has been reported that the government on July 13 held an investors briefing on the sale but found scant interest. This is a contrast to the first attempt in 2010, when there were 23 bidders interested.