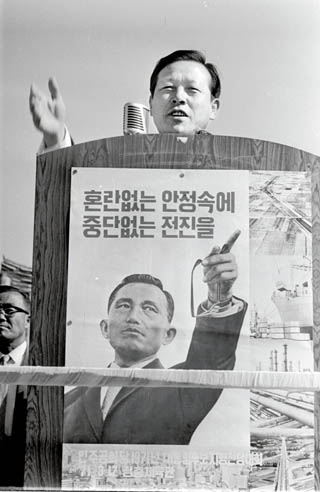 Kim Jong-pil, vice president of the Democratic Republican Party (DRP), endorses President Park Chung Hee on April 12, 1971, on the presidential campaign trail in Wonju, Gangwon. Kim emphasized that Park was the only leader who could effectively control the military for national security. Provided by Chosun Ilbo

In the course of revising Korea’s constitutional law in 1969, the conflict between President Park Chung Hee and his revolutionary comrade Kim Jong-pil came to a head. In spring 1968, Kim retired from politics amid Park’s suspicions that he was trying to take his seat.

In his defense, Kim once even argued that he was not Gamal Abdel Nasser, the second Egyptian president who manipulated and ousted sitting President Muhammad Naguib.

To secure another presidential term, Park, who was already on his second tenure, sought to revise the Constitution and persuaded Kim - who was firmly opposed to the plan - to help him. Kim eventually changed his mind at Park’s insistence, and the two old friends reconciled.

After I decided to support President Park on the constitutional revision, I had to persuade those with me who were originally opposed to the plan. Because Park and I started the revolution together, I thought I had to achieve the modernization of the country, the revolution’s overall purpose, in any way I could.

For the revision, two-thirds of 171 lawmakers needed to approve. Those who supported a third term for Park, including Presidential Chief of Staff Lee Hu-rak and Korean Central Intelligence Agency (KCIA) Director Kim Hyeong-wuk, had already collected signatures from 90 lawmakers but needed 25 more.

The revision couldn’t be passed unless I persuaded some of its opponents in the Democratic Republican Party (DRP).

“Let’s just trust him once this time since he is so eager,” I told them as we played.

The next day, I invited Kim Yong-tae, Yang, Chung and Ye to my residence in Cheonggu-dong. But they were still resistant and even told me to change my mind again. They couldn’t accept the revision, they said, given the founding principles of the party and the motives of the revolution.

“You need to strongly oppose the plan no matter what,” he said.

They left me at last. They didn’t say it, but they must have been disappointed in me and felt betrayed somehow. But I couldn’t just desert President Park.

Rep. Lee Man-sup, who was opposed to the revision, said he could only agree once the presidential chief of staff and the KCIA director stepped down.

The revision suddenly became a matter of who would resign, and those who favored the two men’s dismissals slowly began to react positively toward the revision, with the 18-hour meeting suddenly ending on a good note for the cause. 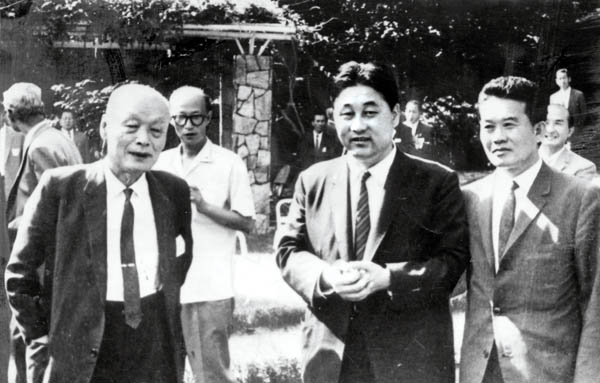 Rep. Jeong Gu-yeong was the only person in the DRP who stayed critical of the revision to the end. The first president of the party thought the constitutional revision would taint the legacy of a great leader like Park.

He understood my situation and asked me to “remain silent, not to support or oppose the revision.”

But I said that I couldn’t. Years later, Jeong told me again that the revision wasn’t understandable in the ideal perspective, but Park’s determination wasn’t necessarily wrong given the situation and desires of the country at that time.”

The decision was followed by a plebiscite, and I immediately embarked on an endorsement campaign until voting day on Oct. 17, traveling more than 300 kilometers (186 miles) a day. We didn’t have expressways like today. So, often moving on bumpy unpaved roads, I twice toured the country.

Some wondered whether Park might again try to reclaim the presidency in 1975, and whether the DRP would keep its position as the ruling party if Park named his successor.

“You don’t even know how much he agonized over it this time; and he won’t run for the presidency in 1975 because the new Constitution doesn’t allow a fourth term,” I said.

At that time, I couldn’t even imagine another revision to the Yushin Constitution, which allowed Park dictatorial power in 1972.

So the revision passed in the vote. On March 18, 1971, I was named the vice president of the newly organized DRP - which was Park’s message to me that I would lead the campaign for the upcoming presidential election just a month away.

I was expelled from the DRP after the party refused Park’s order in April 1969, to vote down the dismissal of Education Minister Kwon Oh-byeong. So I had to venture out onto the campaign trail without any financial support from the party because DRP Financial Committee Chairman Kim Seong-gon refused to approve it.

But I didn’t complain. Until election day, I traveled 12,769 kilometers over 35 days.

Park won over opposition candidate Kim Dae-jung by about 950,000 votes in the seventh presidential election on April 27, 1969. I was sworn in as the 11th prime minister on June 4, but my position was much more humble, only as a supporter, not like a comrade or director as I was immediately following the revolution in 1961.

Reps. Ye Choon-ho and Yang Soon-jik, who were also expelled from the party following the conflict over the education minister, returned to the party at the end of 1970, but both of them lost in the general election in June 1971. Most of those who once opposed the constitutional revision saw the same results.

I still don’t regret changing my stance on the constitutional revision. Park unfortunately passed away, but I think I made the right decision given what he achieved over his 18-year rule. The revision would not have passed if I had continued to oppose it, and the country may not have developed as it has now. Park had no adequate successor - something he worried about often.