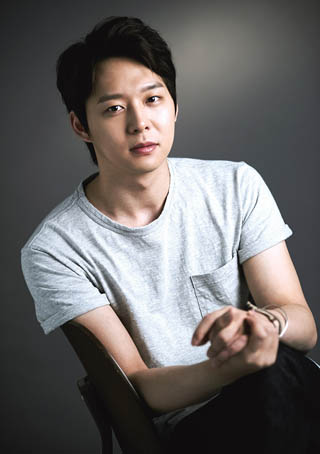 Singer and actor Park Yoo-chun of boy group JYJ will take a break from the entertainment scene as he is scheduled to enlist next month.

The celebrity spent his 20s singing on stage or acting in TV dramas and movies after making his debut as a member of the boy group TVXQ in 2003. He’s received many accolades during his career, most recently Best New Actor at the 51st Baeksang Arts Awards, one of the most prestigious entertainment awards in Korea, in May for his work on the 2014 film “Haemoo.”

Park will begin his military service as a civil officer for two years and four months on Aug. 27.

Before he parts ways with fans, he met with Ilgan Sports, an affiliate of the Korea JoongAng Daily, saying he wants to do another interview on the day he gets discharged, as he’ll be more comfortable then.

Q. You have about a month left before you enlist. How do you feel?

A. I don’t really feel particularly sad since I think I’m doing what everyone else is doing as well.

What did it feel like to see a fellow member who enlisted in the army before you did?

I met him recently because Jaejoong [another JYJ member] got out on a vacation from the army. Surprisingly, it didn’t feel like he was a soldier. He just looks more masculine with a nicer body. He became more charming.

But you are not really serving your military duty at a base. Weren’t you ordered to serve at a public office instead?

I hear serving in the army as a person with asthma is terrible. I tried really hard, took medicine and became healthier so that I could [serve my duty in the field]. I asked for a reassessment of my physical condition. I went to the designated hospital, but in the end, I was notified that I couldn’t. My life could be in danger, so I was denied.

Why do you want to serve in the field so bad?

If it’s something I inevitably have to do, wouldn’t it be better to really serve as a soldier while fulfilling my mandatory duty? I wanted to hide the fact that I have asthma. Plus, you get to serve four months less when you serve as a soldier, [while serving as a civil officer requires you to serve longer.]

You started as a singer. Any plans to release a solo album any time soon?

Not now - I feel like other members are more [talented] than I am at singing.

If you were to make an album, what kind would you make?

I wouldn’t want to do something too commercial. If I were to release an album of my own, I want to sing about my story. I do sometimes sing solo songs that I wrote during concerts, but I never released those as part of an album.

Any particular genre you prefer?

Hip-hop and rap. Because when you rap, you can really take enough time to tell your story.

Many celebrities have gone public with their relationships. What do you think about that?

I have changed my mind a bit about it. It depends on the situation, but if I go public with a person I’m dating, my partner will get hurt. So I’m more in favor of saying, “Let’s not announce our relationship when we’re in one.”

I’m currently not dating anyone. It is not easy dating someone while you keep it a secret.

You have been in the entertainment industry for about 12 years. What lies in your future?

I want to step down [from where I am] well. That doesn’t mean I’ll leave or anything, but I think I’m at my pinnacle as a singer and actor, and it would be hard to keep up where I am.

In that case, I need to find a way to step down well. That’s the homework I need to do from now on.