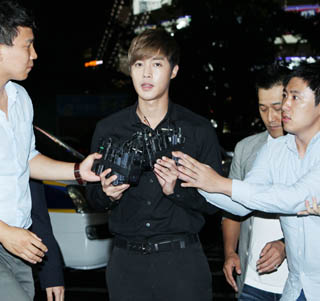 The legal fight between singer-actor Kim Hyun-joong and his former girlfriend has gone from a civil suit to a criminal suit, after Kim took stronger legal action against her.

The 29-year-old reportedly filed a formal petition against his ex-girlfriend at Seoul Metropolitan Police Agency for various charges, including false accusation, intimidation and defamation on Tuesday.

Kim has also petitioned to restrict his former lover from departing the country.

The celebrity alledgedly requested the ban because it will be difficult to access the baby’s records if she gives birth abroad.

It would become especially difficult for Kim to check whether or not he is the real father of the baby.

“Kim’s ex-girlfriend is currently claiming to be carrying the celebrity’s baby,” said Kim’s attorney Lee Jae-man. “Even though she does seem to be pregnant, we can’t confirm whether the baby is Kim’s.

“We have been asking for a sonogram of the fetus, but [his former girlfriend] has not submitted any related materials to the court.”

Lee added that the 29-year-old “is ready to take responsibility of the child if he is the father of the baby.”

Meanwhile, Kim began his mandatory military service in May and is currently serving as a soldier.