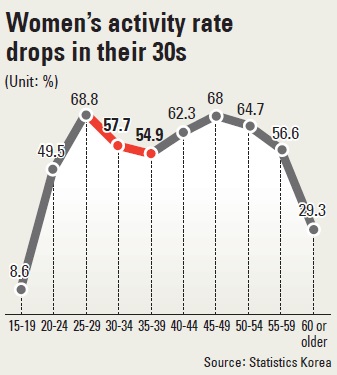 Mrs. Han, a 38-year-old employee of an American company in Korea, often leaves the office early to pick up her child from day care. Later that night from home, she does some work directly with the headquarters in the United States.

Han’s ability to balance work and child-raising duties has made her consider having her second child. That wouldn’t have been possible during the decade she worked for a Korean company.

“It’s the performance that matters with foreign companies, so I can flexibly adjust my working hours,” Han said. “When I worked for a Korean company, I couldn’t leave my desk until my boss left the office.

“A true balance between work and child-rearing will only be possible if Korean companies change their male-oriented, overtime-dependent office cultures.”

From the years of rapid industrialization to today, Korean offices have been thoroughly male cultures. Working late into the night and drinking together were fundamental parts of office life.

This deep-rooted corporate culture has become an obstacle for women getting ahead, and an even bigger obstacle to women finding a work-life balance. Thus, many Korean women think the choice is either-or: They either work, or they stay home and have babies.

That affects Korea negatively in two ways: women participate less in corporate life than in other countries, and the women who do work often choose not to have children, so the birth rate is lowered.

“Korean office culture is largely oriented around long working hours,” said Sung Sang-hyeon, a professor of business administration of Dongguk University. “The average annual working hours for a Korean employee was 2,163 hours in 2013, 393 hours longer than the Organization for Economic Cooperation and Development’s average of 1,770 hours.”

More women want to succeed in careers than ever before. College entrance rates of women surpassed those of men in 2009. In 2005, the proportion of men who went to college or university was 83.3 percent, higher than women’s 80.8 percent. Last year, the men’s rate was 67.6 percent, while the rate for women was 74.6 percent.

“The economic activity rate of women in Korea typically is M-shaped on a graph, which means the figure is highest when women are in their 20s, rapidly drops in their 30s and recovers in their 40s,” said Yun Hee-suk, director of the Department of Public Finance and Social Policy at the Korea Development Institute.

“Then it declines again when they retire. Women who stay on the job in their 30s will be reluctant to have children if [the government] cannot guarantee them work and child-rearing balance in their 30s.”

According to Statistics Korea’s data as of 2014, the economic activity rate for women - the percentage of the population, both employed and unemployed, that constitutes the manpower supply of the labor market - reaches 68.8 percent between age of 25 and 29, which is one of highest in the world. It goes down to 54.9 percent from 35 to 39 years old, and it goes up again as they turn 40. Yun explained that the reason women leave their jobs is because they can’t take the long hours if they have kids waiting at home.

Another downside of women leaving jobs to have children is that the family income is chopped in half. For many women, this is the reason they have a single child and stop there.

Analysts say Europe may provide some solutions. European countries adopted regular part-time jobs and flexible working hours since the 90’s and have successfully offered a work-family balance. Women’s economic activity rate and fertility rates have risen as a result.

“The future of companies depends on how well they handle their female labor force because women’s participation in society will only increase,” said Professor Seong of Dongguk University. “The government must give special tax benefits or financial support to companies that support women employees having children and taking care of them.”

Some Korean companies have gotten the message.

Cha Mi-yeon, a 34-year-old employee of Yuhan-Kimberly, gave birth to her second child in March 2014 and returned to work last March. She is now working 10 a.m. to 7 p.m. thanks to the company’s flexible working hour system, while most other employees work 9 a.m. to 6 p.m. Employees of the companies are also free to choose an hour of lunch time between 11:30 a.m. and 1:30 p.m.

“I’m busy in the morning taking care of my children,” Cha said “I’m happy with going to work an hour later.”

The company also has an open office system. Where she plugs in her laptop becomes her desk for the day, a system the company introduced in 2011.

“The team doesn’t have to stick together, which means I don’t need to watch whether my boss leaves the office or not at the end of the day,” Cha said. “We can leave on schedule because we don’t have to stay in the office meaninglessly.”

Korean companies are adopting daycare nurseries and lactation rooms. The most advanced have flexible working hours or allow working from home.

“Young married couples working in rigid working environments with lots of overtime can hardly take care of both the jobs and families,” said Kim Oi-sook, a professor of family science at Korea National Open University. “The rigid office culture with long working hours must be overhauled above all.”

Some other experts say making sure that the legally mandated welfare for women, including three months leave for childbirth, a year of maternity leave and shorter working hours for the pregnant, is actually used would raise Korea’s low birth rate as well.

“Companies are changing more slowly than families,” said Choi Seong-jae, a professor of social welfare at Hanyang University and former member of a presidential committee on Korea’s low fertility rate and aging society. “Large companies and foreign companies are a bit better, but small and medium sized companies are resistant to change.

“CEOs must know having children and taking care of them is not an issue for wives alone, but involves husbands, too, and [solving the issue] would raise the productivity of companies.”