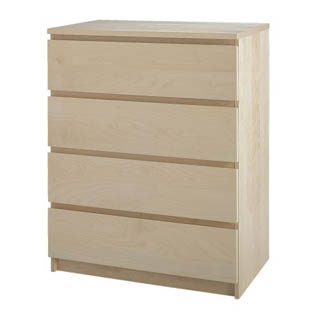 Recent deaths caused by Ikea products have raised concerns over the safety of the furniture giant’s chests of drawers and dressers sold in Korea.

“MALM” and “Ikea” were among the most searched words on popular web portals Naver and Daum on Thursday, and some consumers also shared their concerns on different online communities.

In response to the concerns, Ikea Korea is offering free wall-mounting kits for those who bought pieces from the line, because the incidents were caused by furniture not anchored to the wall.

“In the manual, we informed consumers that the drawers should be fixed to the wall and included the kits for every MALM we sold,” said a spokesperson at Ikea Korea.

“But for anyone who lost the kits, we will offer free replacements.”

However, Ikea Korea is not offering a refund or telling customers to return the furniture as other stores abroad are doing.

“This is not the problem linked with the product itself, rather it is a problem associated with the way it is used,” the spokesperson added.

The U.S. commission stated a two-year-old boy from West Chester, Pennsylvania, died in Feb. 2014, after the six-drawer MALM dresser fell on him.

In a separate case, a 23-month-old child from Snohomish, Washington, was killed in June 2014, when a MALM chest of drawers tipped over and trapped him beneath.

Both Ikea and the consumer agency warn of the risks associated with its chests of drawers and dressers, stating that they can tip over and crush children if not properly secured to the wall.

Ikea said it had received 14 reports of safety-related accidents, which resulted in four injuries.

More than 65 million MALM chests or drawers have been sold worldwide since it hit the shelves in 2002.