FKI raises heat on the Blue House for pardons

FKI raises heat on the Blue House for pardons 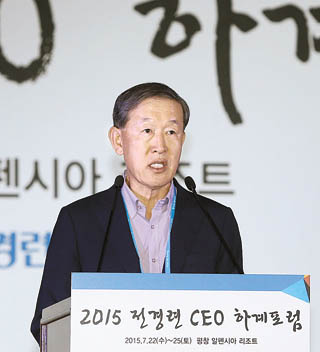 Huh Chang-soo, chairman of the Federation of Korean Industries (FKI), a business lobby, stressed Thursday that President Park Geun-hye should consider granting pardons to jailed business leaders. He was speaking a day after another business lobby head made the same demand.

President Park has hinted that she would give many pardons to celebrate the 70th anniversary of Korea’s liberation from Japanese colonial rule, but has yet to make it clear whether businessmen imprisoned for corruption should be part of the group.

“[SK] Chairman Chey [Tae-won] has already served two-thirds of his prison term and the majority of business leaders in jail are model prisoners,” said Huh, the chairman of GS Group. “I think they had better be pardoned. When they are given a chance to contribute to society once they are out, won’t they make efforts for the nation?”

The chairman was talking to reporters Thursday evening at an annual summer forum that the nation’s oldest business lobby, representing major conglomerates, organizes for corporate leaders.

He also said the federation is working on a document to file with the government to officially request pardons.

When asked about his thoughts on the feud between U.S. hedge fund Elliott Associates and Samsung over a merger of Samsung subsidiaries, Huh said the incident will be a lesson to Korean companies that they should adopt management practices that meet global standards.

“Companies should communicate with external shareholders well,” he said. “Problems occur when there is a lack of sympathy.”

His comments coincide with those from Chainman Park, who also brought up the words “global standards.”

The FKI Chairman suggested that Korean companies study the conversion of the current corporate governance system to force a holding company to own 100 percent of subsidiaries under the same corporate entity - a practice in the United States.

Under the Korean system, a holding company is only required to own 20 percent of subsidiaries.

That has triggered a controversy because it allows family owners of conglomerates to control an entire group despite owning only a small percentage of the shares of their empires.