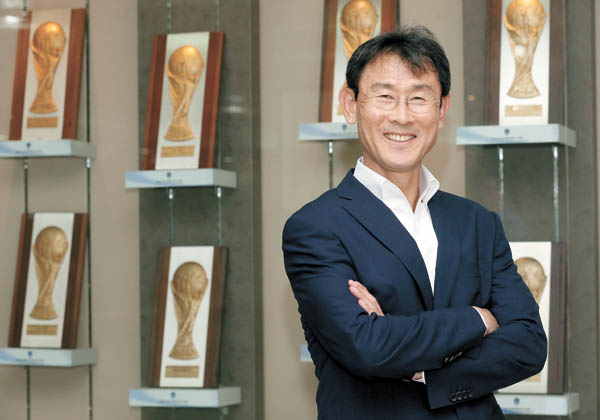 When Yoon Duk-yeo was a football player in the 1980s, his nickname was “Rhino.” Although the 54-year-old was known for a calm and stable character, he turned into an aggressive defender on the pitch.

Korea Football Association (KFA) Vice President Choi Soon-ho, who is regarded as one of the top strikers in Korean football history, also recalled that he had a tough time with the former Ulsan Hyundai defender when he faced him on the pitch.

Yoon became the coach of the women’s national football team in December 2012. After retiring from playing in 1992, he has been only with men’s football teams - coaching the Korea Under-17 football team and assistant coach for the Pohang Steelers, Jeonnam Dragons and Daejeon Citizen - and there were concerns about whether he could manage women footballers.

However, Yoon dismissed all the doubts at the 2015 FIFA Women’s World Cup in Canada last month, after leading Korea to its first ever victory and knockout stage appearance. He signed a new two-year contract with the KFA on July 16 and will lead the team again in the EAFF East Asian Cup, which starts on Saturday.

Ilgan Sports, an affiliate of the Korea JoongAng Daily, met Yoon in Seoul early this month to talk about his three years with the national team and answer questions, some of which were submitted by members of his team.

Q. There were some doubts when you first took over the women’s national team because you had previously coached only men’s teams.

A. Some people even said I got a job through “parachute appointment.” Even the players would have wondered how I became the coach. There was some exclusivism in women’s football and it was difficult. But that made me work hard, visit stadiums more often and check players thoroughly. I wanted to prove the Korea Football Association technical committee’s choice wasn’t wrong. In order for women’s football to advance more, coaches need to be more open-minded. In this World Cup, the coaches of Germany and the United States were women and they looked confident. I hope we can also have women coaches one day.

In the game against Spain, many fans thought the Round of 16 would be impossible after watching the first half. But how did you make the remarkable turnaround in the second half?

Before the game, Dr. Yun Young-kil [who also served as mental coach for the team] talked about mental inertia. In the game against Costa Rica, we failed to collect a win at the last moment, while Spain was quickening the tempo until the final whistle, even as it lost to Brazil. He said that a player’s mental state in the second half could continue through the next match. I was concerned and hoped his words would prove to be wrong. However, in the first half of the Spain match, it really happened (laughs). So at half time, I raised my voice to the players, saying, “Is this all we’ve got? Think about the fans in Korea! Even if we lose, let’s execute what we should have been doing.” Fortunately, we were able to get an equalizer early and our substitute Kim Soo-yun did a big job with a decisive goal. It was a match that will remain part of my football memories forever.

Did you know Kim Soo-yun would score when she delivered the ball from the right flank?

I can tell you it wasn’t a shot, but a cross (laughs). She tried to deliver the ball to Yoo Young-a. After the match, when I watched the video over and over, I noticed that even though her cross hadn’t been made into a goal, Yoo would have scored with a header because Spain’s goalkeeper was far away from the goal line.

Men’s football teams in the past had a strict hierarchy, but that isn’t the case these days. What about the women’s team?

There is nothing like that. The team’s oldest player, Kim Jung-mi, and youngest players, Lee So-dam and Lee Geum-min, have a 10-year age difference, but they get along well. When players eat, Lee Geum-min is the first one to stand in line with her food tray. Senior players just see her behavior as cute and that’s why it is possible. I just like this atmosphere.

Who is the team’s “mood maker”?

Kwon Ha-nul, and she is just above average. The women’s team every year goes to the Cyprus Cup, and there is a party on the final day of the tournament in which players from all nations participate. In one party, she did a “Gangnam Style” dance and grabbed the attention of the party. Even players from other countries asked her to take a photo with them.

Is there a player whom you want to thank most for the World Cup performance?

Yes, they are Jun Min-kyung, Yoon Young-geul, Song Su-ran and Kim Hye-yeong. These four players didn’t play a single minute in this World Cup. I felt sorry for those players and also want to thank them. Since we were in the big time, I wanted to give them an opportunity, but they understood the situation that we were in.

Hwang Bo-ram said her boyfriend was in Canada to support her, while the captain Cho So-hyun also mentioned that she has a boyfriend. What do you think about footballers’ openness about dating?

I look at it very positively. If they don’t cross the line, we don’t have to see it from a strange viewpoint. I also had dates when I was a player. When I was playing with Hanil Bank FC, we didn’t have good results and Coach Kim Ho ordered a curfew for all players. But I sneaked out and dated the girl who is now my wife. But one day, I encountered Kim while I was with my wife, but he just acted as if he didn’t see me.

Since I wasn’t a footballer who played with no discipline, maybe that’s why he forgave me. I hope our players can meet a good person if they want to.

I always tell them to meet many kinds of people and listen to their stories, even if they are related to football.

We know you don’t drink, but can you have a glass of beer with us? (Cho So-hyun)

Of course, you’re always welcome. I think at the pub, I can give you guys more interesting talks. I don’t smoke or drink, but maybe I should drink some that day (laughs).

You seemed to have strict self-control. How do you do that? (Jeon Ga-eul)

I try to walk a lot when I have time. I think a coach’s behavior in front of players is important. When I’m with my daughter avzt home, I act comfortably, but when I’m with you guys, I try to look twice at my dress and appearance because I need to look neat. If a coach doesn’t work hard, I think it will be difficult to get the trust of players.

You experienced the World Cup both as a player and a coach. Is there a difference? (Ji So-yun)

I felt being at the World Cup as a coach was better. What makes me a little sad about this World Cup is that you guys couldn’t show your talents 100 percent because the team didn’t have enough experience on the big stage. Last year after the FIFA World Cup in Brazil, the football commentator Lee Young-pyo said, “The World Cup is a stage where the team has to prove its talent, not a stage to gain experience on.” But I think that his words apply more to our men’s footballers, who went to the World Cup eight consecutive times. Our women appeared in the World Cup for the first time in 12 years, and I think it’s still alright to be gaining experience. So I want us to appear on the global stage frequently and show our skills.