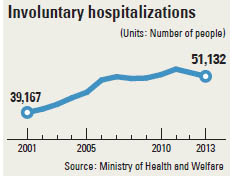 As the rain came down one night in May 2010, Mr. Kim mulled over his escape.

Locked away in a mental hospital just outside the capital, he was once the heir to an electronics business. A man of wealth, he owned assets worth about 100 billion won ($86 million).

“It was about 10 o’clock at night, and when I heard rain pouring down outside, I decided that the moment had come,” the 59-year-old said. “I was in a closed ward with barred windows all around, and the only place where I could escape the prying eyes of the guard was the smoking room.

“I opened the lock on the iron door with a spring from a notebook, just like I had practiced before, and jumped from two stories up. I threw off my patient uniform, got in a taxi and headed to Seoul.”

Kim, separated from his wife, was living in a studio apartment in Bundang, Gyeonggi, on May 17, 2010, the day he was whisked away via a private ambulance to a nearby mental hospital in Incheon. He was later transferred to another hospital.

His coercive transfer was possible under Article 24.1 of the country’s Mental Health Act, which states a mentally ill person may be hospitalized with consent from two of the people legally responsible for his or her protection if it is considered necessary by the director of a mental medical institution or another relevant health professional.

In Kim’s case, his wife and mother had agreed to his hospitalization - his wife reportedly persuaded Kim’s mother to agree, citing an alcohol-reliance diagnosis he had received from a neuropsychiatrist, arguing that he could “fix his addiction” if he were treated at a psychiatric hospital.

After his escape, Kim sued his wife on top of handing her divorce papers. He was forced back to the facility following his flight, though his mother was able to sign for his release a month later.

But Kim’s hospitalization worked against him in his divorce suit. Kim’s wife, who counter-sued, was given custody of the couple’s seven-year-old son, along with assets worth 3.5 billion won ($3 million).

But perhaps most startling is that Kim’s case is not uncommon in Korea: The number of people confined to mental hospitals at their family’s request reaches over 50,000 per year.

There are two ways forcibly confined patients may be discharged: One of the persons responsible for the patient must agree or the case must undergo an evaluation by the Mental Health Inquiry Commission, held every six months.

Furthermore, “Hospitals have no incentive to release patients because they receive 1.5 million won a month per patient from the National Health Insurance Service,” said one neuropsychiatrist, who requested anonymity.

Involuntary hospitalization agreements are considered private contracts between the family and private institutes. Mental patients seeking release must request help under the Protection of Personal Liberty Act, which gives patients the right to make a case for refusing treatment. However, the rate at which courts accept such claims is only 7.5 percent on average.

Mrs. Park, 60, for instance, was forcibly hospitalized by her children in Nov. 2013, following a dispute over the division of the family’s assets. She petitioned for her release twice, but was denied permission by the court.

In order to be released, Park eventually had to sign a memorandum outlined by her daughter in which she had to promise that she would not take issue with her children’s actions.

“The Protection of Personal Liberty Act is meant to give patients a chance to explain themselves and be released from hospitalization,” said Kwon Oh-yong, Park’s lawyer. “But in a lot of cases, judges don’t give those patients a second look.”

In May 2014, the Seoul Central District Court called for a constitutional legitimacy review concerning Clauses 1 and 2 of the Mental Health Act, arguing that there was sufficient reason to rule that both clauses went against due process.

“The reality is that forced hospitalizations are [often] not utilized for medical treatment, but abused for other purposes because of loopholes in the law,” said Shin Kwon-chul, a law professor at the University of Seoul. “There are bills already submitted to the National Assembly regarding the reformation of current court evaluations concerning involuntary hospitalization, but those amendments are being delayed.”