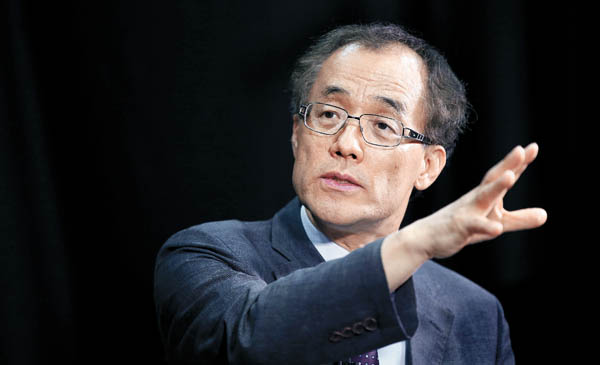 
The outbreak of the Middle East respiratory syndrome (MERS) in May shook the country and, according to Park Byung-joo, chief of the Korea Public Health Association, revealed the underlying problems in Korea’s medical and public health systems.

“If you lose something, at least try to replace it,” he said, emphasizing the need for the nation’s medical system to be radically overhauled.

The Korea Public Health Association, which Park has led since January, conducts research on ways to improve public health and upgrade quality of life in the public sphere.

He also works as a preventive medicine professor at Seoul National University’s College of Medicine.

Q. Society was on edge over the MERS outbreak. Why was Korea so vulnerable to the virus?

A. It can be conjectured that the root cause was the dynamic transition of Korean society. Cholera, typhoid fever and dysentery were prevalent diseases until the 1970’s. But large-scale epidemics ceased to spread after the last cholera flare-up in 1980. This was because people’s diets, living conditions and sanitation improved, spurred on by economic growth.

Korea transitioned from an era of acute infectious diseases to that of chronic diseases. The field of health and medicine shifted its focus to chronic diseases like cancer, heart disease, cerebrovascular disease and diabetes. The problem with this shift was that interest in infectious illnesses rapidly declined. So we were hit by a foreign epidemic that spread pervasively due to globalization.

So a disinterest in infectious diseases and a subsequent drop in investment were the underlying causes?

It happened because Korea didn’t pay any attention to its basic medical systems when it was advancing as the world’s best in high-tech medicine. In a word, we were unguarded.

Emergency rooms were the major transmission routes for the spread of MERS. Is it true that emergency rooms are not receiving enough investment?

Under our current medical system, anyone can go to the emergency room. Medical accessibility can be said to be high, but in reality, it’s an inadequate medical environment. Emergency rooms in major cities are chaotic and indecent for doctor-to-patient consultation. People are sitting on floors and in corridors, with guardians and family members all mixed in. In such densely packed areas, it’s only natural for infections to spread.

To resolve this, it is crucial to separate patients. Korea’s emergency medical service system has a stage in which the doctors evaluate patients’ symptoms and group them accordingly. From now on, this procedure will need to be enhanced, allowing for strict separation among the contagious and the healthy. Patients suspected to be contagious will have to be sent to a one-person emergency room for treatment. That way, emergency rooms won’t become passageways for contagion.

But why didn’t Korea think of the possibility that an outbreak could spread that way?

Investment does affect whether a virus spreads through an emergency room; I see it more as a fundamental flaw in Korea’s medical system. Korea hasn’t implemented a system of family doctors like European countries have. In Europe and elsewhere, if a local doctor catches an illness from a patient for whom he or she was responsible, they are transferred to second and third medical institutions, in that order.

By contrast, the Korean medical system allows for hospitalization at high-end medical facilities after a simple examination in the emergency room. Because patients wait in emergency rooms for days to be transferred to bigger hospitals, there is no solution to deal with possible contagion.

How should Korea improve its medical system?

First, we need to see where the Korean medical system lies in terms of its structure and efficiency. The Korean medical system has combined the U.S. laissez-faire market system with Europe’s socialist system, so it’s difficult to form a competitive market in public health. The service provider has lots of medical knowledge and information, whereas the consumer, the ordinary citizen, does not. Due to this asymmetry, health and medicine has to be fueled by the concept of the free market. Therefore, we have to look beyond the markets themselves to seek the kind of medical service that works for the greater good.

The United States is currently undergoing strenuous medical reform because of a radical increase in medical expenses with no real benefit for its citizens, which is due to its continued reliance on the market system. Korea’s medical system requires development in both the civilian and public sectors. Right now, the influence that can be exerted by city, provincial and regional medical institutions is very limited.

How should the public health sector be expanded?

Realistically speaking, Korea’s public medical services make up 10 percent, with private medical services accounting for 90 percent. Taking these statistics into account, dividing the role of each sector is important. Investing in public medical facilities to promote their use by regional patients is an urgent priority. Then, public service networking needs to be established properly in order for the bigger medical institutions to regulate smaller health centers. To prevent another MERS outbreak, the public medical sector must be expanded as quickly as possible.

What are medical welfare systems in developed nations like?

Within Europe, medical service is seen as a public good. There are quite a few countries that have restricted individuals from opening private general hospitals, which need a lot of investment. Also, because Europe utilizes a family doctor system that assigns a regional doctor to specific individuals, patients have to move from first, second and third medical institutions, consecutively, according to their doctor’s orders. Thus, big hospitals aren’t overcrowded.

However, there is a flaw, in that strict procedures within medical services mean that there is no flexibility, thereby resulting in some patients not receiving treatment in time. But this is being ameliorated.

Korea is learning from European countries and needs to consider adopting the family doctor system. It is a ground-breaking policy that emphasizes illness-focused treatment over a patient-focused one. A local doctor can examine one patient for an adequate amount of time, remedy simple illnesses and transfer serious cases to big hospitals. When this happens, there will be no need to be on standby in emergency rooms for a ward to become available. Thus, emergency rooms will be deterred from becoming sites of contagion.

The MERS outbreak is coming to an end. What are your thoughts, as a preventive medicine professor, on these developments?

Going through the MERS crisis, I thought of one proverb: “Fix the stable before the cow escapes,” which refers to the need to address the problem before something bad happens. Koreans have a bad habit of trying to quickly address an incident after it has already occurred. Without bearing in mind various solutions to alleviate them, there may not even be a chance to resolve things later on.

The severe acute respiratory syndrome outbreak in 2003, the swine flu outbreak in 2010 and now the MERS outbreak have repeated every six years. The issues have to be addressed when the opportunity is there. Preventive measures need to be considered, reflecting on past experiences. Only with thorough medical reform will public health be kept sound. Temporary measures will simply repeat tragedies.

There was a lot of criticism directed toward the Ministry of Health and Welfare for its initial handling of the MERS outbreak. What is your opinion on the current problem with existing policies and disease countermeasures?

I think that one of the most regrettable things during the MERS outbreak was not utilizing professional manpower to the fullest. There is more awareness about public health administration in developed countries. Korea has a lot on its agenda related to health policy, including an increasing elderly population and chronic illnesses.

In addition, the field of public health offers a lot of diverse jobs. It won’t be easy to build a health system that is of real help to Korea.

However, the important thing is accepting the professionalism of such health care systems. Even U.S. President Barack Obama listens intently to professionals, sitting down with them and treating them as the people in charge when health-related problems arise. Opportunities are given to professionals in which they can work with conviction on real-life cases. Likewise, a system that allows decisions to be made from a professional perspective is necessary in the field of public health administration, rather than deciding what to do simply because it is part of procedure.