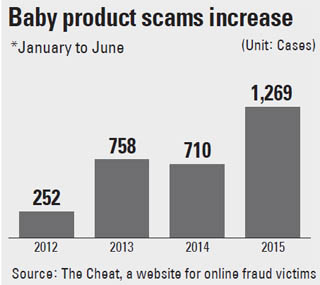 When Mrs. Choi, the mother of a five-year-old son, saw an online post for a second-hand Turning Mecard, an immensely popular transforming robot toy here, she knew she had to act fast.

The toy typically goes for about 15,000 won ($13), but due to short supply, most consumers usually buy them through second-hand markets at even higher prices.

Choi had tried to buy the Turning Mecard robot car, but the new versions sold out quickly, and generally those who lined up at large shopping malls at dawn are the only ones lucky enough to get their hands on them.

So as soon as she saw the post, she called the seller and sent the money.

She got the toy, but her son complained: It didn’t “transform” very well and it wasn’t the same size as the ones his friends had.

But when Choi called the manufacturer, she was dismayed to discover that the toy robot car was just an imitation of the original Turning Mecard anime character.

In Korea, demand for baby products has surged. According to the online shopping mall Auction, transactions for second-hand baby products like strollers and toys increased by 240 percent from June 14 to July 13, compared to the same period last year.

“A few years back, most parents thought they should buy new products, at least for their children,” said Wu Du-sik, the secretary general at Customers Network, “but they’re increasingly looking for second-hand products amid a worsening economy.”

The problem, however, is that now swindlers have begun targeting those consumers. According to The Cheat, a website on which online fraud victims can share their experiences, the number of online scams involving baby products stood at 1,269 between January and June, a giant leap from the 710 over the same period in 2014. In the ranking, categorized by the type of fraud, baby products - which ranked ninth in 2012 and fifth in 2014 - had moved up to third place.

A few swindlers have been apprehended. Songpa Police Precinct on July 14, arrested a 26-year-old man who allegedly uploaded an online ad for a used stroller and storybooks, stealing 10 million won from 48 people. The suspect, surnamed Song, was said to have posed as a mother with a young child, and included pictures of products he had taken from other sites.

The police added that scammers are increasingly turning to schemes that involve inexpensive products. “Buyers should always demand a phone number or address from the seller rather than just a KakaoTalk ID, which can easily be modified, before they buy second-hand products,” said Kim Yeong-sun, who heads Dongdaemun Police Precinct’s cyber investigation team.