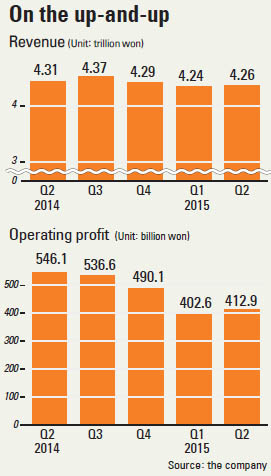 SK Telecom saw its second quarter earnings improve, with marketing costs down due to the government’s restrictions on smartphone subsidies.

When compared to a year earlier, revenue dipped 1.2 percent while operating profit saw a sharp drop of 24 percent. The company said the decline in operating profit year-on-year was an aberration, due to the company spending roughly 110 billion won on the voluntary retirement of 300 employees in April.

“Revenue has fallen compared to a year ago because the network interconnection fee was reduced while sign-up fees have been eliminated,” said Lee Yong-hwan, the company’s chief financial officer in a conference call. “The one-off cost of the retirements had an effect on operating profit. When we take that out, we actually made 520 billion won.”

Although both revenue and operating profit fell year-on-year, SK Telecom showed confidence that both will significantly improve.

According to the mobile carrier, subscribers for its LTE service now amount to nearly 18 million, or 62.6 percent of all subscribers. It added that the monthly average data usage per LTE subscribers has increased from 3 gigabytes at the end of the first quarter to 3.3 gigabytes in June, indicating a solid growth in the sector.

The company also showed confidence that its next-generation platform plans including the internet of things (IoT) projects that interconnect home appliances with digital devices into the so-called smart home would also contribute to securing an improved operating profit.

The company recently acquired the remaining 49.4 percent stake of affiliate SK Broadband in order to secure its media platform.

One of the biggest changes the mobile carrier enjoyed was the sharp drop in its marketing costs, which has fallen 12.5 percent from the previous quarter of 846 billion won to 740 billion won. Even when compared to a year ago it fell 10.3 percent. This was largely thanks to the government’s restrictions on subsidizing the latest smartphones to earn more customers.