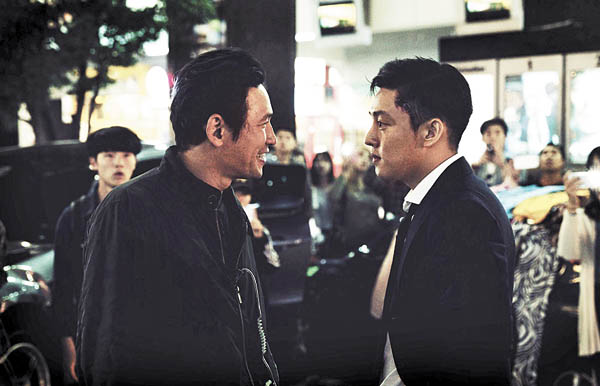 
Director Ryoo Seung-wan has taken on everything from comedies to spy films and crime thrillers. But he has never let go of his signature style: movies loaded with action.

But his newest film “Veteran” adds a twist.

The flick is packed with intense action scenes including fist fights, gun battles, car chases and even boxing.

But it’s also very funny, a change from his latest works like “The Berlin File” (2012) and “The Unjust” (2010), both of which took a serious and critical approach toward society.

“Veteran” requires no hard-thinking or reading between the lines. The conflict is very clear from the beginning, with a hot-tempered police officer trying to take down a reckless young millionaire who isn’t afraid of anything in the world.

The righteous cop is played by Hwang Jung-min who has often played detectives on-screen.

This time, Hwang’s character Do-chul is the type of guy who doesn’t know how to compromise with anything unjust.

The film is, admittedly, not very realistic - it’s unlikely that a single police officer would be able to take down a corrupt chaebol heir, however unfortunate that may be.

But movies are often a form of wish-fulfillment, and “Veteran” is a good example. Director Ryoo admitted that the film was born from an out-of-the-blue desire for more upright police officers like Do-chul, who can stand up to the more unsavory characters in life.

Do-chul’s opponent, Tae-oh, is played by Yoo Ah-in, trying out a villainous role for the first time. Yoo, 28, has played a good-natured kid in “Punch” and another naive boy who falls in love with an older woman in the JTBC drama series “Secret.”

Yoo’s past roles never seemed to quite fit, even if he was always lauded for his acting abilities. But things really seem to click with this character, and it feels like he’s finally landed the right part.

Tae-oh’s character gives no explanation about what has made him into a demonic heir who is addicted to drugs, knocks up girls and betrays his longtime assistant.

He has always slipped through with his malicious acts using money and his insurmountable chaebol background. But with Do-chul cornering him at every turn, the bad lad finally goes ballistic.

The final confrontation taking place in bustling Myeong-dong, central Seoul, is a heart-pumping chase scene followed by a bare-fisted battle on the road.

It is something expected from the beginning, but watching the bad guy fail tremendously in front of everyone (including the audience) is very pleasurable.

Although there are a number of times when it feels like Ryoo is trying too hard to extract comedy in scenes where he didn’t need to, “Veteran” is still a film you won’t regret watching in theaters this summer.

It opens nationwide on Wednesday.