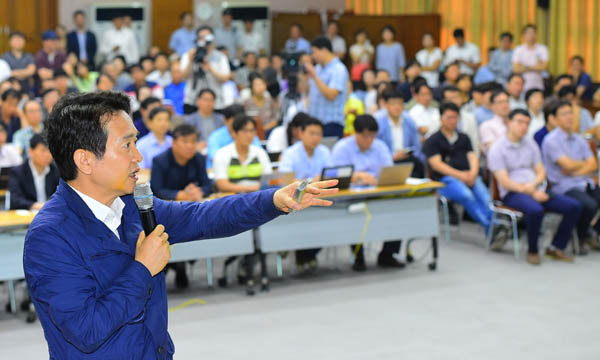 Gyeonggi Governor Nam Kyung-pil gives presentation on Thursday for the development project to relocate the provincial government building to Gwanggyo and develop the nearby area. The presentation took place at the province’s current office building in Suwon.

The new Gyeonggi Government Complex will move into a multi-purpose town in Suwon in 2020, where it will be surrounded by cultural and administrative facilities, the provincial governor announced Thursday.

The administrative town of Gwanggyo, Suwon, about 4 kilometers (2.5 miles) east of the current Gyeonggi Government Complex, will also house restaurants, hotels, duty-free shops and other administrative buildings, profits from which will help fund the new facilities, according to Gyeonggi Governor Nam Kyung-pil, who unveiled the road map Thursday.

“We will scrape up the budget for the new government complex without a loan,” Nam added, “and we will listen to residents and allow them to participate in the process to reflect their ideas.”

According to the provincial government’s plan, the complex encompassing cultural and convenience facilities will take up about 26,000 square meters (6.4 acres) out of 126,000 square meters and is expected to bring in approximately 150 billion won ($137 million) in profits. 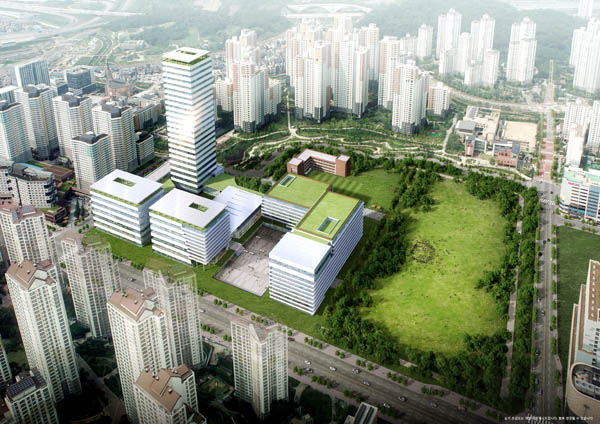 With that and the money obtained from selling the current government complex estate, the provincial government expects to have a total budget of 560 billion won.

The provincial government said that it has also come up with plans to avoid detracting from its surroundings.

The Gyeonggi government is currently reviewing a plan to construct a building that runs lengthwise, rather than follow through with the original 25-story design that includes three underground floors, to avoid a sense of incompatibility with the structure’s surroundings.

The complex housing cultural and convenience facilities is also slated to solely house luxury hotels, duty-free shops and products from the province’s social enterprises and to avoid competition with existing local businesses.

The provincial government is planning to get approval from the Ministry of Land, Infrastructure and Transport by December this year and complete the design sometime in the first half of 2016.

Actual construction will begin later in 2016, though landscaping is set to begin later this year.

The Gyeonggi government came up with the plan for the new administrative town in 1995, though it previously ran aground mostly due to financial issues.

“The new plan will also give us a plaza, a place where the government and the people can communicate together,” he added.

The Asian financial crisis hit just two years after the plan was proposed in 1995.

It was promoted again in 2001, but delayed once more due to the global financial crisis and a controversy at home over local governments’ use for luxurious complexes.