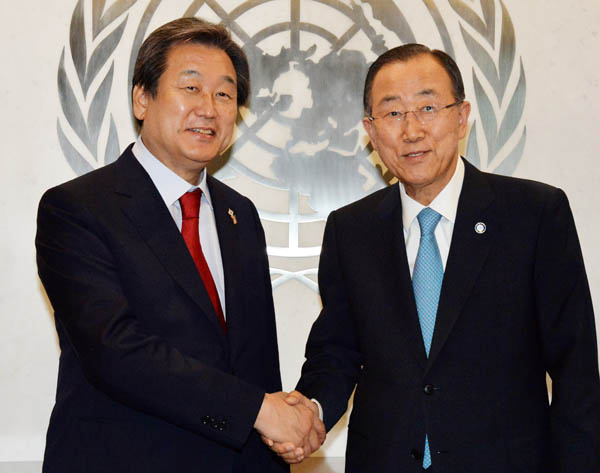 South Korea’s ruling party leader on Thursday declared that another Saenuri Party victory in the 2017 election was his utmost priority, at the same time brushing off speculation over whether he would run for the presidency.

Saenuri Chairman Kim Moo-sung’s remarks during a press conference in New York came amid growing speculation that the five-term lawmaker will enter the election ring, now two years away, on the back of his tenure as the ruling party’s top leader.

He stayed humble, arguing that he was unqualified to lead the nation as president, but nevertheless stated that it was crucial that the Saenuri win in 2017 so that the Park Geun-hye government could relinquish power to a fellow conservative, which would see the ruling party in control for three consecutive terms.

“It is of utmost importance that the conservative party maintains its power,” Kim said. “Whether I could be president is another question entirely.

“I think I am unqualified to be a presidential contender. [To become a president,] the needs of the people must be matched with [the abilities of a candidate] at the time of an election,” the 64-year-old political veteran said. “But I doubt such an opportunity could come before me.”

While Kim appeared to be downsizing expectations that he will run for the presidency, political observers see him as one of a handful of potentially strong presidential hopefuls with a good shot to enter the Blue House.

Kim’s trip to the United States as the ruling party leader also ignited further speculation that he was trying to raise his profile abroad to cement possible election hopes.

The ruling party leader arrived Saturday in Washington, where he met with members of the U.S. Congress, including House Minority Leader Nancy Pelosi. He also addressed students at Columbia University in New York.

During the conference, Kim also expressed concerns over Korea’s sluggish economy and the possibility that the country could fall into a deflation trap just like Japan 25 years ago.

“Our economy is entering a crisis mode. We are on the same path that Japan was on 25 years ago when it fell into a deflation trap,” he said. “But our situation is worse because of a super-low birth rate and much higher household debt.”

Afterward, Kim had a closed-door meeting with United Nations Secretary General Ban Ki-moon at the U.N. headquarters in New York.

During the 45-minute talk, neither discussed domestic politics, according to a Saenuri spokesman.

Ban remarked that he was “willing to play any role in bringing North Korea to the discussion table to help improve inter-Korean ties.”

Kim asked Ban, who has 17 months left in his second term, to help boost the international community’s determination to resolve the nuclear standoff with North Korea, particularly in light of recent negotiations between Washington and Tehran, which resulted in a new nuclear accord.

Their meeting also underscored the prospect that the two might work together in the 2017 election, especially with Ban scheduled to step down as U.N. secretary general at the end of next year. However, Ban has so far denied conjectures that he may enter domestic politics after his job at the U.N. wraps up.