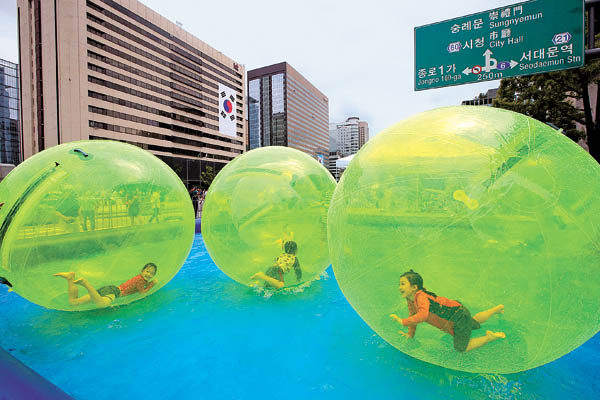 Children play inside giant balloons inside a water park created in front of the Sejong Center for the Performing Arts in Gwanghwamun, central Seoul, on Sunday. The water park, created by the Seoul Metropolitan Government, operated until 6 p.m. By Oh Jong-taek

All three deaths happened on Saturday, including an 89-year-old in Muju County, North Jeolla; an 84-year-old in Cheongju, North Chungcheong; and an 82-year-old in Sancheong County, South Gyeongsang.

Police said heatstroke was the cause of their deaths. They were all found dead in their fields. The highest temperature in all three areas surpassed 30 degrees that day.

At least three similar cases were previously reported by the Korea Centers for Disease Control and Prevention this summer, which warned elderly people not to farm in the heat.

With vacation season in full swing and the outbreak of Middle East respiratory syndrome concluded, police also reported several deaths from the waters.

A 31-year-old man drowned off Jogeum Naru Beach in Muan County, South Jeolla, on Saturday, the Jeonnam Fire Service said, citing accounts of people who pulled him from the water and called the police.

At the upper tributary of the Bukhan River in Hwacheon County, Gangwon, on the same day, a 58-year-old was found dead 40 minutes after the police received a call saying a body was drifting down the river, authorities said.

In Uijeongbu, Gyeonggi, on Saturday, a 43-year-old who was swimming in the Inbuk Stream went missing. A six-hour search by police ended fruitlessly and a rescue team of some 10 people are currently on the hunt.

Weather for the upcoming week will be hotter than last week, with most days partly cloudy except Wednesday, when rain will drench Seoul, Gyeonggi and the western part of Gangwon in the afternoon, the weather authority said.

Most areas across the country will range between the mid-20s and low 30s this week, similar or a bit higher than average for the time of year.