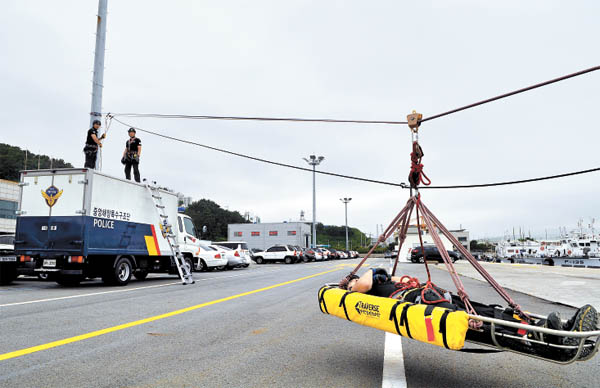 The Maritime Special Rescue Division conducts a training exercise in a parking lot on July 20. The newly created rescue team has no training facilities and lacks proper gear, due to budget shortages. By Cha Sang-eun

Members of the Maritime Special Rescue Division parked a truck next to a 15-meter (49-foot) light post in a parking lot of the South Regional Headquarters of the Korea Coast Guard on July 20 in Busan. Standing on top of the roof of the truck, they tied a cable to the post. One member carefully moved around to avoid the parked cars and tied the other end of the rope to a ground fixture about 20 meters away.

Another member took his place on a stretcher. His role for the day was to play an accident victim who had lost consciousness. Then, the others winched the stretcher down along the cable from the tower to the ground.

It was practice for transporting a victim from a ship that foundered along the coast. The newly created, supposedly “state-of-the-art” special rescue team is having their exercise at the parking lot because they don’t even have a training field, despite the government’s ambitious promise to improve the country’s safety.

The Maritime Special Rescue Division was set up following the sinking of the Sewol ferry in April 2014, which left more than 300 people dead. That followed the dissolution of the Korea Coast Guard by President Park Geun-hye because of its scandalously poor rescue operation for the Sewol.

“A special rescue force complete with state-of-the-art equipment and the most advanced technologies will be set up for dispatch to the site of any disaster in any part of the country,” President Park said in a speech on May 19, 2014, a little more than a month after the sinking of the ferry. In the address, she pledged to “strengthen significantly its capacity to take effective action during the ‘golden time’ [the precious first moments after an accident when lives are at risk] of rescue operations.”

The rescue force was established in December 2014 with 62 rescue specialists from the Coast Guard. But it still doesn’t have a headquarters or place for training.

This summer, from July 13 to 15, the rescuers did training at a local swimming pool in Changwon, South Gyeongsang. Sometimes, they use a training field at the National 119 Rescue Headquarters in Daegu, which is 121 kilometers away from the team’s temporary offices in Busan.

Park Gwang-ho, a high-level staffer on the rescue force, said he feels nervous when the team travels far away for training.

“In any emergency, we will have to take a helicopter from Busan’s Gimhae International Airport,” he said. “If we travel a long distance for training, it could take a long time to arrive at any accident scene. We could miss the ‘golden time.’”

Currently, three agents are stationed at the airport at all times, but the rescue force said it would be difficult to react to a large accident with that skeleton team.

The rescue force’s interim headquarters is in a two-story annex at the Busan branch of the South Regional Headquarters of the Korea Coast Guard. Local riot police previously used the space.

The first floor of the building is shared with the coast guards. Due to a lack of space, diving suits and flippers are stacked at the entrance of the building, and submersible decompression chambers and oxygen tanks are stored in two containers outside the building.

The rescue force has asked for extra space near the port of Busan and plan to build a headquarters with a heliport on the site. But its plan is stuck. The Vessel Traffic Service Center and Korea Marine Environment Management Corporation also want to use the land.

The budget for the rescue force this year was 2.1 billion won ($1.8 million). But according to Ryu Yong-hwan, who is responsible for the unit’s administration, that is not enough to purchase gear necessary for an operation in the deep ocean. Ryu added that the rescue team postponed purchasing a remotely operated underwater vehicle to next year.

“I’m not sure how many people are willing to work under these circumstances,” an agent said under the condition of anonymity.

Kang Sin-young, an ocean engineering professor at Korea Maritime and Ocean University, pointed out the government is slipshod in its planning of the force.

“Under the current environment, the rescue force is having a hard time earning trust from the government, as it is not able to show any remarkable results from a serious accident,” he said.