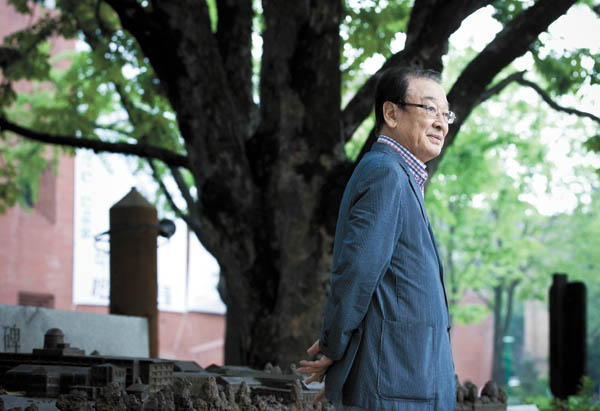 Lee Soon-jae, who believes that the artist who shines at the very end is a true artist, claims that art is something that one must pursue forever. By Kwon Hyuk-jae

Veteran performer Lee Soon-jae may be in his 80s, but his dedication to acting is still just as strong as that of his younger counterparts.

Lee, a familiar face among the younger generation thanks to his turn in the reality program “Grandpas Over Flowers,” is a highly respected thespian who has acted over the past 60 years.

Throughout the last few decades, he has taken lead roles in hundreds of projects - hits that include “What is Love” (1991), “Hur Jun” (1999) and the sitcom “Unstoppable High Kick!” (2006) - and is currently starring in two dramas, “Scholar Who Walks at Night” and “Make a Woman Cry.”

But even though Lee has become an irreplaceable TV personality, he still visits and takes part in local theater productions in Daehang-no, northern Seoul.

He most recently participated in “On Golden Pond,” which ran for about two months last fall. In addition, he is even scheduled to direct the play “Hague 1907” (working title), starting Aug. 15.

The following is an edited excerpt from an interview with the JoongAng Ilbo, an affiliate of the Korea JoongAng Daily.

Q. When did you develop a talent for acting?

A. I wasn’t a talented actor in my youth. In fact, I’d never even thought of becoming an actor.

But after seeing Laurence Olivier star in Shakespeare plays, I thought that maybe acting was doable for me, too. At the time, actors were underestimated. To me, however, acting seemed like an artistic act, a creation.

I actually didn’t have anyone who taught me how to act. I just studied acting by myself, and watched various TV personalities on television. I also practiced Korean vocabulary and pronunciation [to properly convey lines to viewers] using a Korean dictionary. Before becoming an actor, I worked for a broadcasting department for about a year. But one day, it occurred to me that merely earning a salary wouldn’t guarantee me a future, so I went to the drama department and asked actor-director Lee Hae-rang to give me a role in a drama series, which was the beginning of my professional acting career.

So, I basically began acting out of a desire to earn money. My father even personally came to the drama center to directly confront me about whether this was the path I wanted to take, and I told him that it was the only future for me. In response, my father told me that whatever I choose to do, I would only survive if I become No. 1 in my field.

Your father’s words turned out to be true.

I’m very thankful I was able to look after my parents throughout their lives. My mother passed away in 2008 at the age of 95. If I had been working for an average company, I would have retired by the time [she passed away], and therefore, it might have been quite difficult for me to properly care for her. But, I was glad I could take responsibility for looking after my mother until she passed away.

You have appeared in over 300 projects.

I believe acting requires creating something new each time I’m given a new role, and I think making something new is interesting and fun. I believe this is one of the most attractive aspects of being an actor. Some people may say that all the roles that I take on are portraying someone’s grandfather. But I want to create something new despite my limited roles. In fact, I always try not to repeat past roles because repeating what one is good at can lead an actor to fall into mannerisms and fall behind. To me, acting is my pride. It’s not something that I do for fun. And when it comes to acting, there is no such thing as mastering it. You just have to constantly work toward completion. For example, when I’m scheduled to shoot a project, I show up an hour earlier to start memorizing my lines. I repeat my lines over and over again and try my best to concentrate because if don’t, I wouldn’t be able to come up with something creative.

What do you think about young actors and actresses today?

These days, there are many young actors and actresses who are not given proper language training, [which is necessary to properly deliver lines]. The Korean language has a lot of synonyms, and pronunciation definitely isn’t easy. But because most idols are paid so much to take part in drama series, the production crew can’t really give them feedback [on their amateur acting].

Why did you marry your wife, Choi Hee-jung, so late?

I met my wife after directing a play at the high school that my sister-in-law was attending. My father-in-law invited me over to his house for dinner and gave me movie tickets, which I used to go on a first date with my wife. I married her in 1966, when I was in my early 30s, [which at the time was not considered early for a man to wed]. I couldn’t marry her earlier because I didn’t have a stable income, and was, therefore, not in a position to start a family. 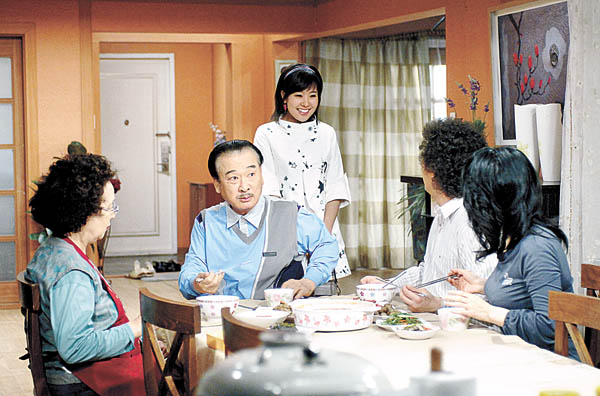 You will celebrate your 50th wedding anniversary next year. In all that time, you have never been at the center of any scandals or controversy.

Scandal? If I’m ever embroiled in a scandal, I would be kicked out of my house. [laughs]. Graduating from Seoul National University [the most prestigious university in Korea] also influenced my attitude.

After failing to be elected to parliament by 750 votes, I was finally elected after four years. Nobody applied in Jungnang District, eastern Seoul, where I worked as a local lawmaker. Basically, it was an abandoned district. But I grew close to the district’s residents throughout my eight years living there. Even after I quit politics, I still kept in contact with the people there, including Jungnang District’s cultural director and the director of the social welfare council.

You currently work as a chair professor at Gachon University, teaching acting despite your busy schedule?

Of course. Since I’m not a scholar with knowledge on various acting theories, the only way that I can contribute is to teach what I learned through my experience. When it comes to acting, I believe being trained how to act is a lot more crucial than learning acting theory. Also, interacting with young people at school is great fun and a joy in life for me.

How do you maintain your health?

There is no time for me to take care of my health. For me, waking up in the morning itself is managing my health.

How long do you plan to continue pursuing acting?

If I ever start to suffer from Alzheimer’s and make mistakes five or six times during shoots, then I’ll quit. But until then, I want to continue with my acting career. In my life, there has never been anything else but acting.

Out of the more than 300 projects Lee took part in throughout his 60-year acting career, he chose five drama series that he described as his best work.

From left to right. “Live As I Please” was released in 1966, the work of Yoo Ho, one of the most respected screenwriters in Korea. In the show, Lee portrayed a private tutor working for an affluent family.

The second TV drama the octogenarian mentioned, “Pungwoon,” translates as “crisis” in Korean. The historical drama revolved around Heungseon Daewongun (1820-98), the father of King Gojong (1852-1919). Lee noted that he quit smoking after starring in the show, explaining that the lines spoken by Heungseon Daewongun were typically at least four minutes long, and he didn’t like having a dry or hoarse throat during his delivery.

The third drama series, “What is Love” (1991), garnered a nearly 60 percent viewership rating. He starred as the father of the character Dae-bal, receiving critical acclaim for his performance. The drama was written by female writer Kim Soo-hyun, who also penned other well-received dramas like “Mom’s Dead Upset” (2008) and “Childless Comfort” (2012).

Lee’s fourth pick was “Hur Jun” (1999), a historical drama that had a 53 percent viewership rating. He took on the role of Hur Jun’s teacher, Yoo Eui-tae.

Lee also chose the sitcom “Unstoppable High Kick!” (2006) to be included in his top five, and went on to participate in the program’s sequel, “High Kick Through the Roof” in 2009. His comedic role in both shows made him more recognizable among the younger generation.