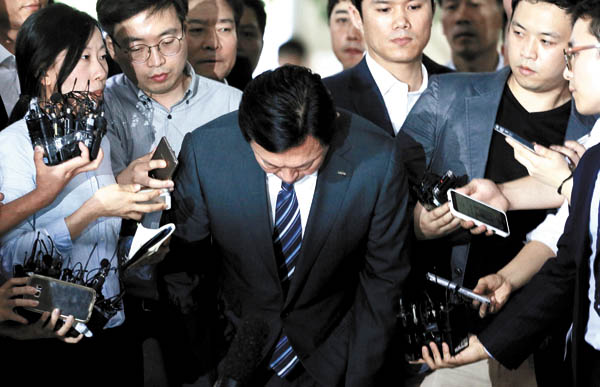 Shin Dong-bin, chairman of Lotte Group, bows as an apology for the latest scandal over management inheritance after arriving at Gimpo International Airport on Monday. By Shin In-seop

Shin Dong-bin, who ousted his own father as leader of the Lotte Holdings last week in Tokyo, returned to Seoul on Monday and had a meeting with his father for five minutes.

“The overall atmosphere was warm and gentle,” said Lee Jong-hyun, spokesman for the Lotte Group.

But an anonymous source from the Lotte Groups tells the JoongAng Ilbo, an affiliate of the Korea JoongAng Daily, that “it appears the two failed to make progress on the matter of management control.”

On Monday, the younger brother arrived from Tokyo at Gimpo International Airport at around 2:30 p.m. Surrounded by reporters, the corporate scion bowed in apology for the controversy surrounding the familial takeover battle and answered questions.

“I am very sorry for causing this stir,” Shin Dong-bin told reporters in his not-so-fluent Korean.

“My role is to bring the business back to normal and restore order in accordance with the founder’s principles.”

He then headed straight to the Lotte Hotel in Sogong-dong, central Seoul where his father was staying.

A Lotte Group source said that the two exchanged greetings.

The founder greeted his younger son with a small smile and answered, “Uhh,” when the son said he had returned from the business trip to Japan.

Whether elder brother Shin Dong-joo or Shin Sun-ho, the younger brother of Shin Kyuk-ho, were present at the meeting was unclear.

In the video released Sunday night to SBS, the patriarch said in a two-minute statement that he directed the dismissal of the younger son from Lotte Holdings through a document on July 27.

After the video was aired, doubts arose over the patriarch’s mental stability. He spoke haltingly and identified Lotte Holdings as a Korean company instead of a Japanese company.

At the airport on Monday, Shin Dong-bin dismissed his father’s statement about his dismissal as “not legally binding.”

Attention is now turning to an upcoming shareholder meeting of Lotte Holdings, which will likely decide the fate of Lotte’s management. The two brothers both say they will triumph at the meeting, though no one knows when it will be held.

The older brother said in an interview with Japan’s Nikkei last week that he will seek to change the existing board and bring back his father. But he refused to answer questions about the physical and mental state of his father.

The founder was removed from his post at Lotte Holdings on July 28, a day after he attempted to fire Dong-bin and five other board directors of the company.

Shin Dong-bin told Nikkei that shareholders will approve the creation of a new position of honorary chairmanship to be bestowed on the founder. But the timing of the shareholder meeting is still a mystery.

“It’s been only a month since [Lotte Holdings] held a shareholder meeting on June 30,” Shin said, “It depends on legal procedures to decide whether now is good or a bit later is better.”

The older brother earlier played down an ownership stake held by the younger brother in Lotte Holdings.

He also claimed that he could receive support from two thirds of shareholders when combining the voting rights held by himself and Kojyunsya, a major shareholder of Lotte Holdings headed by the founder, along with employee’s who own stock.

But Lotte in Korea says the second son is in a more favorable situation.

The intense family feud is fueling anti-conglomerate sentiments among the public as it exposes murky corporate governance and ruthless family infighting common at Korea’s family-run business groups, the chaebol.

At chaebol, the decisions on top management is often directed often come from the patriarch of the owning family or the toughest son no matter what shareholders may want.

On July 27, the founder flew to Tokyo and reportedly called a meeting with some ten executives at the headquarters of Lotte Holdings and ordered them to fire six board members including his younger son.

There was no board or shareholder meeting called to okay such a major change in leadership.

Shin Kyuk-ho holds a miniscule 0.05 percent stake in the Lotte Group in Korea, according to Fair Trade Commission, but still makes all the key decisions.

In the document presented on July 27, the founder also demanded Lee In-won, vice chairman of Lotte Group, and Hwang Gak-gyu, president of policy coordination at Lotte Group, to be removed from their posts.

“This battle is all about the corporate leaders’ perception that the company is their personal possession,” said Kim Woo-chang, professor of business management at Korea University. “This should be used as an argument for the need for more transparent corporate governance.”

Lawmakers from both the ruling and opposition parties lashed out at the business group. The response from political circles and the public is pertinent because the government will likely pardon jailed corporate heavyweights on Independence Day on Aug. 15. Analysts say hostile public reaction to the Lotte battle might discourage the Park Geun-hye administration from going ahead with the pardons.

“People are now infuriated to see that the chaebol, who should be working on reviving the local economy, are engaging in tug of war purely for their own interests” said Rep. Seo cheong-won of the ruling Saenuri Party on Monday.

“The chaebol are no longer a growth engine for development,” he said on Monday. “Rather, they pose a risk to the economy. A discussion to reform the chaebol should be made.”