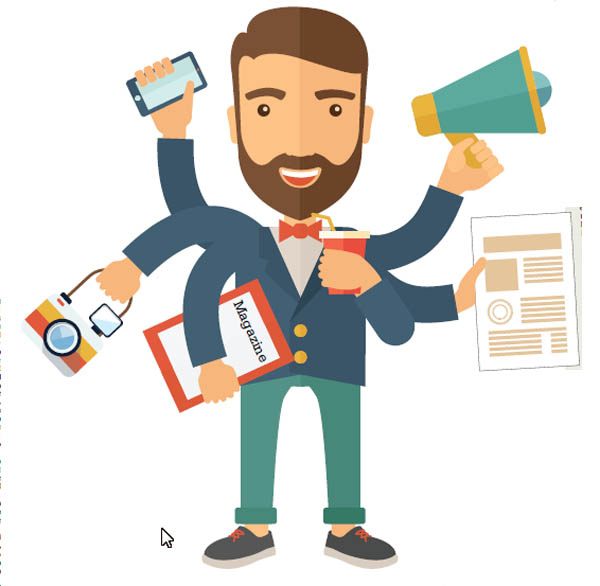 Upon opening Rockxury magazine, readers will likely notice that the featured model is the same man.

A look at some emerging independently published magazines. From top: 66100; Wet Magazine; Rockxury; COOL; The Kooh. Each one focuses on a particular subject and has its own base of readers.

Sometimes he appears wearing a pair of trendy sunglasses, holding a coconut with a straw, as if on a tropical vacation (The reality, however, is that he’s standing on top of a raft constructed with water bottles in a stream in Seoul). Other times, he is shown playing ping-pong on the narrow roof of a building, or engaging in other not-so-common activities.

But this atypical male model, 32-year-old Han Young-seok, is also the creator, producer and publisher of the magazine. Since college, he had often thought about compiling a humorous book - an idea that eventually made it into print.

For the project, Han literally does everything - working as the magazine’s model, photographer, editor, printer and publisher - though he gets some occasional help from friends. 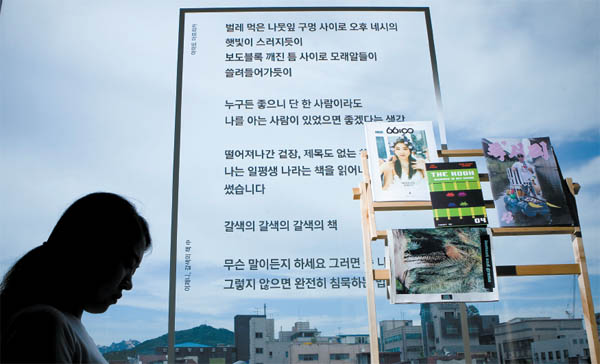 A view from Your Mind, a small bookstore in front of Hongik University in western Seoul. The store only sells independently produced publications and magazines. By Kwon Hyuk-jae

But he’s not alone in his one-man magazine. Other creative types have also begun self-producing fashion magazines or other niche publications in recent years in an effort to diversify available content and freely expand upon ideas they’ve long kept to themselves.

Another such booklet, the fashion magazine 66100, provides health and beauty tips for the everyman. Instead of using models, average people, usually stopped on the streets, monopolize the pages. That’s because the aim of the publication, coordinated by 28-year-old Kim Ji-yang, is intended to show that all people have value in a world ever-influenced by consumerism and appearances.

The magazine’s name honors that idea, throwing its support behind the average-size woman. For ready-made clothes in Korea, 66 is the largest women’s size. Only smaller are 44 and 55, and 100 is the largest size for men.

“The numbers [in the magazine’s name are intended to] represent plus-size consumers,” Kim said.

Most of these magazines have started out with one person, but as the independent publishing industry expands, other interested parties have jumped in to help in making the content more varied.

Kim said she’s been offered help from people from a variety of professional backgrounds, including editors, photographers, designers, makeup artists and fashion stylists.

She recalled that at first 66100 had a poor reception, even among its intended demographic, though more readers have delivered messages of thanks and gratitude.

“I get good feedback at least once a day, and those compliments are a power source for me to push through and continue making the magazine,” Kim said.

The fashion magazine prints 1,000 copies of each edition, and the first issue has since completely sold out, with many buyers seeking out older editions. The increased appeal has made Kim consider hitting the shelves of larger bookstores to expand its base.

In the same vein, the fashion magazine COOL focuses on finding the popular styles seen in everyday life. Its publisher, Yang Min-young, 29, said she first started to think about how clothing could serve as an unlimited source of content when she was writing an essay about the clothing she wore for a master’s degree course.

“This magazine is different from other fashion magazines because it helps to expand the concept around certain clothes,” she said.

In line with the idea, COOL’s first edition focused only on uniforms.

For her project, Yang brings her camera out on the street to photograph people wearing the styles that suit the theme of the upcoming edition.

She takes the photos first, then approaches her subjects for permission.

“If I ask them first, even if the photo just shows the back of the person, they pose awkwardly,” she said. “So I’ve been learning techniques that obscure people’s faces [in my photos].”

Another independent magazine focuses solely on those who passionately pursue certain hobbies or interests. Go Seong-bae, 32, has so far published five editions of The Kooh, a play on the commonly used Korean Internet slang deokhu, which refers to a maniac.

Each time, he has focused on an extraordinary subject - addiction or occult magic books, for example.

Some view these types of one-person-does-it-all magazines as a one-man media trend that originated from the widespread use of social networking services. But the phenomenon is mostly considered more a part of indie subculture than anything else, and booklets published outside mainstream publishing companies are primarily seen as attempts to defy conventions.

In support of this trend, a number of bookshops that only house independently published books have also emerged.

And because these publications often fly under the mainstream radar, most of these magazines are only found in indie-style bookstores, and independent publishers usually go from store to store requesting to have their final products displayed.

These booklets have yet to find a larger crowd, but that seems to be a minor detail for most publishers, who primarily want to keep their products out of larger chains.

Go, who created The Kooh, admitted that he felt like the charm of his book would deteriorate if it were to be sold at larger stores.

Because Rockxury also is “so lightweight,” he said, it wouldn’t fit in well at large bookstores.

“What we call indie culture seems to continue existing even when it’s [not readily available],” said Lee, the bookstore owner. “If a bigger business tries to meddle, or the publications are made to turn a profit, the meaning that only independent publications can have will disappear.”

Still, the trend continues to grow.

Lee said he gets almost one request per day from independent publishers asking whether they can display their books on Lee’s shelves.

However, industry watchers say that more diversity is needed in the field for the independent publishing sector to really grow.

“In this culture [of making one’s own books], sellers become buyers and buyers become sellers,” said Yang, who publishes COOL. “I hope people don’t think it’s too hard. Anyone can challenge themselves to find what it is they do best.”