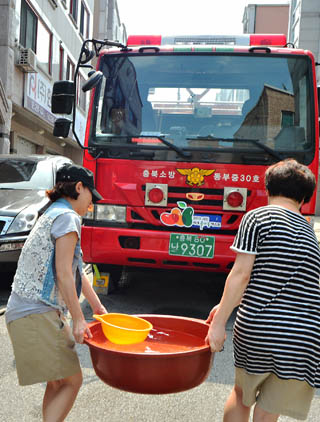 Residents of Yongam-dong in Cheonngju, North Chungcheong, move a container filled with water as a fire truck from the city’s Dongbu Fire Station provides emergency water supply to the district. [NEWSIS]

Thousands of households in Cheongju, North Chungcheong, have been without water for three days after a local water pipe broke.

The city’s Headquarters for Water Utilities Management said Monday that part of a conduit connecting Daecheong Lake and a newly-built local purification plant broke during a replacement operation on Saturday. Some 2,000 households in the city’s Sangdang District, where the purification plant is located, were cut off from the water supply for three days.

The operation was an attempt to connect the new purification plant to an existing plant.

According to Jeong Myeong-woo, the head of the city’s water authority, workers were trying to connect two pipes, one 80 centimeters (31 inches) in diameter and the other 90 centimeters, to the new purification plant. The 80-centimeter pipe broke Saturday due to hydraulic pressure and water supplies were cut off. Jeong promised to supply water to the district residents as soon as possible, and work resumed on the pipes later that night. They thought the broken pipe was fixed.

But at 4:30 a.m. the next morning, the 80-centimeter pipe broke again when water passed through it. The authority immediately took emergency measures, but the same problem happened a few hours later. About 5,000 households in Sangdang District and Cheongwon District were cut off.

After being criticized by local residents, the utility is supplying water only through a 900-millimeter pipe. Parts of Sangdang District are still cut off.