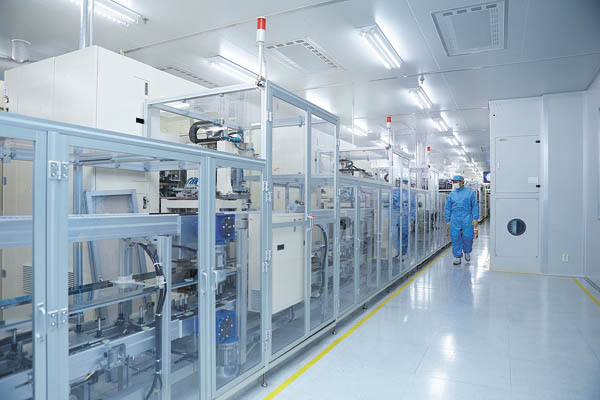 A worker of SK Innovation is at the company’s electric vehicle battery production plant in Seosan, South Chungcheong. The company recently doubled the size of the facility as part of its works to increase its share in China that is expected to grow as the biggest electric vehicle market in the world. Provided by the company

Instead of robotic arms moving car body parts, conveyer belts ferried silver aluminum cells and other battery parts. The plant is a new one, and most systems are automated, requiring only a few workers to monitor the process.

It takes only one day to produce a battery cell, but it takes 15 days to inspect the finished product. Quality control measures are strict. As one employee opened a laboratory door, a flood of 43-degree Celsius (110-degree Fahrenheit) air with 23 percent humidity gushed from the room where some of the testing of completed batteries is conducted.

“Producing electric vehicle batteries needs a high level of concentration,” said Lee Hyung-bok, a spokesman at the plant. “That is why more than 30 percent of workers here have more than 10 years of experience in the field.” 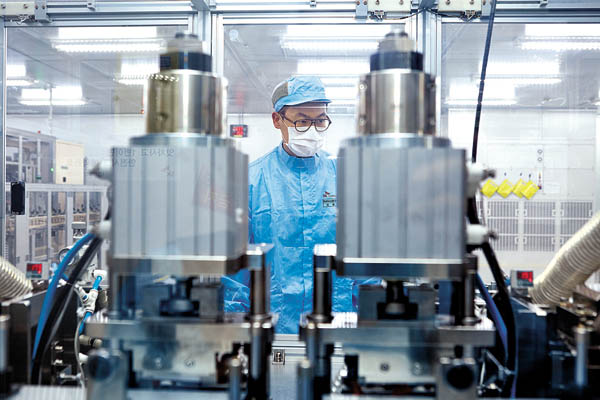 Cells for electric vehicle batteries can be assembled in a day, but quality control testing extends for an additional 15 days. Provided by the company

The company recently doubled the capacity of the plant, which can now produce batteries for 30,000 vehicles a year. Measured in energy terms, that’s 700 megawatt-hours of batteries.

The output of SK’s plant at the Global Technology Center in Daejeon brings the company’s production capacity to 800 megawatt-hours per year.

The Seosan plant was completed in September 2012 on about 5.7 hectares (14.1 acres) of land. It was built to meet increasing demand from its customers, especially Kia Motors and Beijing Auto.

The plant operates around the clock.

A late starter in the industry, SK Innovation has won substantial contracts from Hyundai Motor, Kia and Beijing Auto. It says that its batteries now power about half of Korea’s 2,700 electric vehicles, in particular the Kia Ray and Kia Soul, the two most popular here.

According to the research firm B3, the electric vehicle market is growing fast. Most major carmakers and many new entrants like Tesla are in production, global sales were about 1.9 million units last year, and that annual sales number could increase to 6 million units within five years. In value terms, B3 predicts that last year’s $3.6 billion market will grow to $21 billion in 2020.

“The facility expansion was made because the demand for EV batteries will consistently grow as environmental regulations are strengthened,” said Ryu Yoon-sang, another spokesman at SK’s plant here.

The vehicle battery market is currently led by another Korean company, LG Chem, which operates two production plants, one in Ochang in North Chungcheong and the other in the U.S. state of Michigan. It is building a third plant in Nanjing, China. LG Chem supplies batteries to 13 automakers and is wooing Renault-Nissan, the market leader in electric vehicles, to put its batteries in the lineup of the French-Japanese alliance.

Samsung SDI is also chasing LG Chem and trying to improve its competitiveness in the market for larger batteries, such as those used for electric vehicles and for storage of energy on electrical grids. It is building two plants; one in Ulsan, South Gyeongsang, and the other in Xi’an, China. The combined output of the two factories will be sufficient to power 40,000 vehicles per year. SDI now supplies batteries to BMW, Jaguar, Chrysler and Ford.

SK Innovation is pinning much of its hopes on the Chinese market. In January, it established a joint venture, Beijing BESK Technology, with Beijing Auto to supply batteries for the automaker’s ES 210 and EV200 models. The EV200 is widely used by taxi operators in the polluted Chinese capital. This year, SK also contracted to supply batteries for electric buses with another Chinese company.

Projections of China’s electric vehicle market growth suggest that 5 million units could be sold there in 2020. SK Innovation wants to cement its position as the largest battery supplier there by 2017 to take advantage of that growth.

“The company had its toughest year last year; it was in red ink for the first time in 37 years,” said the company’s CEO Chung Chul-khil. “But we still decided to expand the Seosan plant because we strongly believe that the electric vehicle market will be a new growth engine for us and we believe our technology is very competitive.” That plant expansion was Chung’s first project after he became CEO early this year.

The company won’t say how much it has earned or lost in the battery business, but said it expects this year’s revenue to triple that of 2014.

“Our goal for this year is to supply batteries for 20,000 units to our clients, including Hyundai Motor, Kia Motors and Beijing Auto,” said Kim Hong-dae, head of the battery division. “We will keep trying to expand our share in the global market by improving our business efficiency and strengthening our partnerships.”